9/11 Anniversary: Talking with Kids about the News

9/11 Anniversary: Talking with Kids about the News 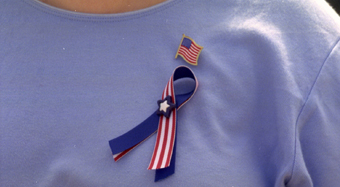 “Chopped off their heads!” exclaimed my 5-year-old from the backseat of the car. “They were chopping off heads of PEOPLE? No one does that! People don’t do that to other people! Right, mommy?” she added a little desperately.

Her reaction jolted me back to reality. We were driving along and my mom was in the front seat. We were tuned in to NPR but my mom and I were totally enraptured in our conversation. It’s amazing how quickly you forget that just because you aren’t paying attention or listening to what’s on the radio, it doesn’t mean your children aren’t listening. They remind me quite regularly that they are always listening, except, it seems, when I am asking them to do something specific.

With the tenth anniversary of 9/11 upon us, there is no better time to prepare for how to talk to young kids about bad news. Ten years ago I was newly engaged to be married. I worked 3 blocks from the White House and on that beautiful September day when it seemed nothing would ever be the same again, it never occurred to me that across our area and the country, parents were faced with the horrible reality of having to talk with their children about the day’s events. Not to mention how difficult it must have been for those parents to censor the visual images that were on a chronic loop for weeks on the TV.  Personally, I will never forget the sight of army tanks slowly rolling down 14th street towards the 14th street bridge, with army personnel jogging along the side, wearing latex gloves. It was like a Spielberg movie except that it wasn’t. The abundance of rumors about planes crashing into the Capitol and terror possibilities on the Metro were enough to warrant you to want to remain at home for days. And though it’s only been 10 years, those were the days before Facebook and Twitter and texting. Not everyone had a cellphone. And if you did, it certainly wasn’t working for those first hours on that fateful day.

So, with the advent of social media and the speed with which news travels, how do we talk to our kids about terrible news? Do we help them by sheltering them from the news?  Do we proactively tell them about current events or do we wait until they hear something and then explain it to them? I really don’t know that there is a formula and common sense tells me that it depends on how old the child is. One of the reasons I really appreciate this particular page is because of the “Age-by-Age Insights” link which provides more information on how kids understand and process news based on their specific ages. My biggest take-away from researching is that children under 8 should be shielded from bad news (so apparently my 5-year-old doesn’t need to hear about people chopping off heads on NPR…) and that parents should engage children, ask them what they’ve heard, listen to how the kids understand the news and develop a dialogue with your child about what is happening in the world.

If you are concerned specifically about the increased amount of coverage because it is the tenth anniversary of 9/11, the American Psychological Association (APA) teamed up with Nickelodeon to produce a half-hour special called “What Happened? The Story of September 11, 2001.” Here is a really amazing  link to the APA Q&A on talking with kids about 9/11.

Though I’m certain we all would like to shield our kids from bad news forever, it seems that being prepared and engaging them in an age-appropriate conversation is the most productive and healthy approach.