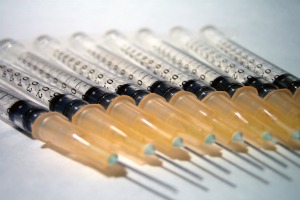 This week, Representative Michele Bachmann (R-MN) made some waves by questioning Texas Governor, and fellow Presidential hopeful, Rick Perry about an executive order he issued mandating the HPV vaccine for girls in his state as part of the battery of vaccines required for public school eligibility. Bachmann suggested that Perry had been mandating an untested vaccine with questionable effects, her insinuation being that he did it at the behest of vaccine-maker Merck, who was a contributor to Perry. Bachmann later stated that a woman had come up to her before the debate and told her that her daughter had suffered mental retardation after receiving the HPV vaccine.

This recounting of things said is the end of the facts I can verify about this story.

What this discussion is failing to do is foster a valuable and important reminder to women about their cervical health. And while I can’t verify the facts of Governor Perry’s relationship with Merck or Representative Bachmann’s conversation with the mother of a Gardisil recipient, I can share some important facts about Human Papilloma Virus (HPV), cervical cancer, and the HPV vaccine:

As of June 22, 2011, approximately 35 million doses of Gardasil® were distributed in the U.S. and VAERS received a total of 18,727 reports of adverse events following Gardasil® vaccination: 17,958 reports among females and 346 reports for males, of which 285 reports were received after the vaccine was licensed for males in October 2009. VAERS received 423 reports of unknown gender. Of the total number of VAERS reports following Gardasil®, 92% were considered to be non-serious, and 8% were considered serious*.

Cervical cancer is not a joke. HPV is not a joke. I tested positive for HPV in 2005 and showed cervical abnormalities in 2009. The abnormalities were serious enough to merit surgery to remove them so that they would not get the chance to develop into cancer. The kind of cancer that killed a high school classmate of mine a few months later. The kind of cancer that affected a young family member of mine and could recur and require more treatment, more surgery, a loss of fertility or a loss of her life.

Rep. Bachmann is choosing to make hay out of a sensitive issue. But she’s failing to use her moment in the spotlight to talk about the rest of the HPV story, the one that goes beyond grumbles about the HPV vaccine and sexual morality. The important part of this story is the opportunity to talk about how common HPV is and what kind of health problems it can lead to, to remind women to talk to their doctors about their options for maintaining their reproductive health and preventing major health issues, and to encourage women to get Pap smears and know their HPV status. And, please, take note that uninsured women may be eligible for free cervical cancer screenings under the National Breast and Cervical Cancer Early Detection Program.

Please, women, don’t be distracted by the politicization of the HPV vaccine this week: instead use this as a reminder to call your gynecologist to schedule an appointment to get screened for cervical cancer and talk about ways you can reduce your risks. And call your friends and family to remind them to do the same.

Read more about HPV and cervical cancer from the Centers for Disease Control and the American Cancer Society.

If you are uninsured and wish to be screened for breast of cervical cancer, contact the National Breast and Cervical Cancer Early Detection Program.

Rebekah is a DC-area mom with an over-developed sense of irreverence, socialist tendencies, ADD, and a blog.  She recently quit her non-profit sector job to pursue her dream of not working. She now spends her time answering her 3-year-old son’s questions and ranting at www.mom-in-a-million.com.