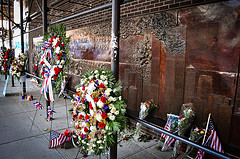 It was an ordinary Tuesday. My kindergartener was settled in to the routine of the elementary school. My preschooler was learning the ropes at her new preschool. I was kneeling on my bedroom floor leafing through a set of galley proofs for a book that was due to be returned to the printer that afternoon. Just an ordinary Tuesday…

…until the phone rang. It was my sister. She told me to turn on the TV.

I wasn’t then and am not now a during-the-day TV watcher, except for kids’ shows of course. I can honestly say that I didn’t look away from the TV for weeks…months. In fact, the only time the TV was off was when my kindergartener was home from school.

She was a chirpy, bright, ready-to-take-on-the-world 5-year-0ld. I hated…absolutely hated that my husband had to tell her about 9/11. I would have given anything in the world to NOT tell her. Little kids…and big kids for that matter…shouldn’t have to know.

Why did we tell our 5-year-old about 9/11? Because we did not want her to hear kids on the bus talking about 9/11. My husband kept it brief. He told her that “bad people had hurt the U.S. and that we were going to get the bad people.” He left his explanation at that. We didn’t tell her about planes, the Twin Towers, the firefighters, the injured, or those who perished. We kept it simple.

I don’t cry at the drop of a hat. My steeliness was thrown out the window on the day I watched the 9/11 film at the Newseum in Washington, D.C.

The documentary was hard for my husband and I to watch. I teared up as I remembered how everything changed on 9/11. My children had a different reaction to the documentary about the day that they know about but only vaguely remember.

The 15-year-old watched quietly. After the movie she asked what she was doing that day. As we talked she recalled little bits of memories. Her world was forever impacted by an event that she barely remembers. My younger two were mostly concerned with why I was tearing up. They have rarely seen me cry. I explained how sad I felt about the tragedy.

To my kids, 9/11 is a day in history. To me, 9/11 embodies why I am proud to be an American… a naturalized American citizen.