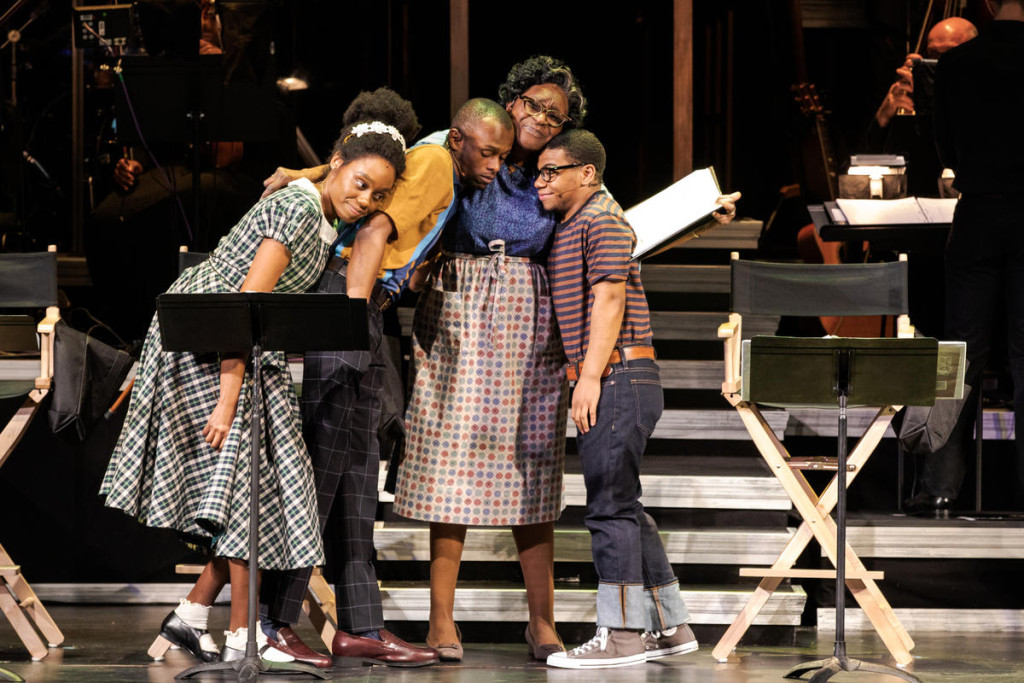 Tomorrow is your last chance to treat your family to see  the world premiere of the Kennedy Center commission, The Watsons Go to Birmingham 1963, tonight or during two performances tomorrow. My 11-year-old son and I have both read the book, although he read it a few months ago, and I read it years ago. We thoroughly enjoyed the semi-staged performance, which reminded me of the wonderful staged readings, anniversary specials, and composer tributes we’ve seen on PBS. Get tickets right now!

Even though we were both familiar with the book, you don’t have to have read Curtis’ award-winning story to understand the play about an African-American family of five that drives from their hometown in Flint, Michigan to Birmingham, Alabama. We especially loved the actor who played Kenny, the protagonist. He was hilarious. The entire cast was memorable, including the wonderful Nova Y. Payton as the background vocalist. If we had one tiny quibble it’s that the opening night we attended had a few technical difficulties, like occasional feedback.

Meet the Watsons of Flint, Michigan: Momma, Dad, little sister Joetta, big brother Byron, and ten-year-old Kenny. When Byron can’t stay out of trouble, the whole family piles into their “Brown Bomber” and drives south to visit Grandma Sands for the summer. But along the way, they’ll experience a pivotal moment in the Civil Rights Movement.

Christopher Paul Curtis‘s Newbery Medal and Coretta Scott King Award–winning book comes to life in a staged concert adaptation by Christina Ham with live music by Darius Smith, directed by Faye Price. Told through Kenny’s ever-witty perspective, The Watsons Go to Birmingham–1963 captures hilarious family antics alongside poignant observations of Birmingham’s tragic church bombing. Experience the beloved story of a family’s bond and endurance amidst one of the darkest periods in America’s history.

The cast will feature Tichina Arnold (CBS’ The Neighborhood) as Wilona Watson, J. Bernard Calloway (Memphis) as Daniel Watson, Chad L. Coleman (The Wire, All American, The Orville) as Narrator Kenny & Other Broadcast Voices, Alicia Grace (the Kennedy Center’s She A Gem) as Joetta “Joey” Watson, Dante Myles Hoagland (The Last O.G.) as Kenneth “Kenny” Watson, Isabell Monk O’Connor (The Gospel at Colonus) as Grandma Sands, Nova Y. Payton (the Kennedy Center’s Broadway Center Stage: How to Succeed in Business Without Really Trying) as the vocalist, and Justin Weaks (the Kennedy Center’s Long Way Down) as Byron Watson.

Most enjoyed by age 9 and up. All patrons, regardless of age, must have a ticket. Please note: This is presented as a semi-staged adaptation. The actors will carry scripts in hands for various scenes of their performance. Erika Rose will replace Tichina Arnold as Wilona Watson for performances on Sat., Mar. 23.

Event parking at the Kennedy Center is $23.