Dave the Musical at Arena Stage Is Charming & Timely

Dave the Musical at Arena Stage Is Charming & Timely 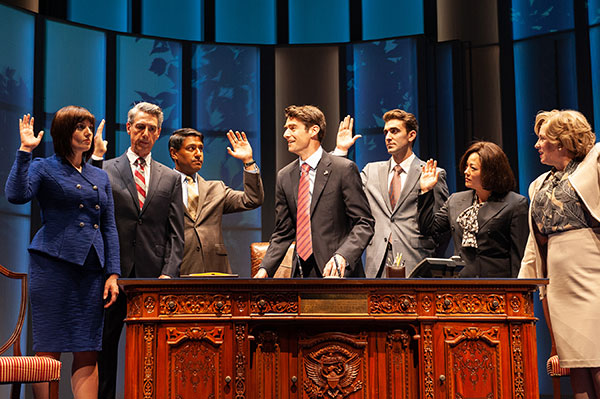 The musical DAVE  is currently running in its final week at Arena Stage, and if you love musical theater and enjoy seeing musicals even before they make their Broadway debuts, don’t miss your chance! Believe me, I’m still kicking myself for not going to see DEAR EVAN HANSEN when I had the chance to see it here during its Washington, DC tryout.

From a Tony and Pulitzer Prize award-winning creative team, comes the world-premiere musical comedy Dave, adapted from the Oscar-nominated film. Dave tells the story of high school teacher (and presidential lookalike) Dave Kovic, who is hired by the Secret Service as a stand-in for the Commander-in-Chief. When the President falls ill under less than “presidential” circumstances, Dave is thrust into the Oval Office to avoid a national scandal, and must find a way to gain the trust and love of the American people … and the First Lady.

Even if you didn’t see the original 1993 comedy starring Kevin Kline and Sigourney Weaver, the musical will still charm you. Now, even more than in 1993, a show about a fake president doing a better job than the real one holds particular interest — especially to DC audiences.

Thanks to the award-winning team behind Dave, highlighted by composer and two-time Tony winner Tom Kitt, the musical features top-notch compositions, stage and music production, and voice talent. As the titular Dave (who early on does double duty as President Bill Mitchell before doing the impersonation of President Mitchell), Drew Gehling is quite charming. He’s a nerdy history teacher obsessed with Abraham Lincoln, and he’s earnest and endearing while the actual President was smarmy and egomaniacal. Gehling has an ideal Jimmy Stewart meets Matthew Broderick appeal. His vocal work is fine, although as the First Lady, Broadway veteran Mamie Parris is even better.

Parris’ First Lady is jaded and stuck in a loveless — indeed, intensely hostile — marriage of political convenience. But by the end of Act I, the First Lady realizes that the President isn’t really her President. Parris powerfully evokes her disappointment, fragility, and confusion — and later her wonder and attraction to the man pretending to be her husband. “The Last Time I Fake It” is a powerful (and comical) anthem, and later her duet with Gehling in “Not Again” is particularly touching.

The real scene-stealers are the President’s power-hungry chief of staff, Bob Alexander (Douglas Sills) and his communications director, Susan Lee (Bryonha Marie Parham), who together decide that Dave is the perfect solution to the problem of a president who becomes incapacitated in a highly sensitive situation.

If you love musical theater, you’ve got to see this now. Don’t wait until it’s on Broadway and you can’t get tickets. 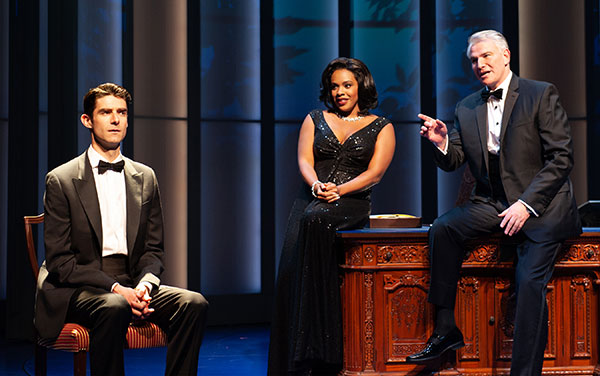 DAVE is at Arena Stage’s Kreeger Theater until Aug. 19 (1101 Sixth Street SW). Tickets are still available, depending on the day and time of the performance: Get tickets here. Runtime is 2 hours and 40 minutes, including one 15-minute intermission. Please be advised that the performance includes haze and strobe lights. Parking is available for $20 for advance reservations (202-488-3300) or on a first-come, first-served basis the night of the performance for $22.