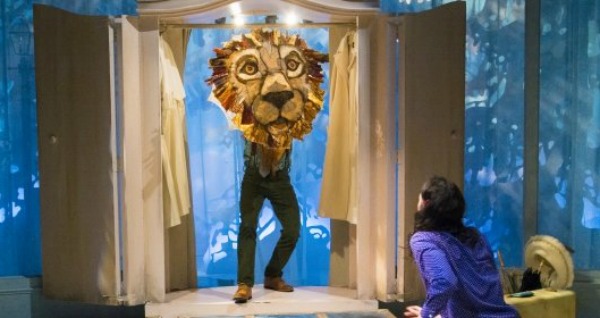 This post was written by our contributor Melissa Moore

Step into the magical land of Narnia with snowball fights and Turkish delight at Adventure Theatre’s The Lion, the Witch and the Wardrobe.

Within the first few minutes of Adventure Theatre’s production of The Lion, The Witch and the Wardrobe, siblings were sword fighting with umbrellas and snowballs began to appear out of thin air before being tossed into an off stage snowball fight. And, watching all this, my 6-year-old son was sitting on the edge of his seat with a grin plastered across his face. Fortunately, the magic continued as Turkish delight, tasting of pizza and buttery popcorn, was tossed across the stage and characters were dramatically turned into stone statues at the flick of a fan. Yes, my little boy’s smile stuck around for nearly the entire hour long show.

Honestly, this take on the C.S. Lewis novel could easily be renamed “Lucy, Peter and the Snowy, Magical Land of Narnia.” The production begins with Peter and Lucy Pevensie reminiscing about their childhood adventures in Narnia with their brother, Edmund, and sister, Susan; then the story proceeds into Narnia with Chris Dinolfo, Peter, acting all the male roles and Audrey Bertaux, Lucy, acting the female ones.

As an adult, I found it a bit disappointing to watch just two actors attempting to portray the complexities of this classic story; however, my kids appeared to be quite amused by the character changes. After the show, my first and second-grade children told me that their favorite part of the entire production was watching Lucy become the White Witch and Peter become Edmund.  This sort of character development was apparently very age-appropriate for my children.

My kids also appreciated the minimalist set design of this rendition of The Lion, the Witch and the Wardrobe. Being familiar with the movie and the book, both my kids were a bit relieved that the characteristic lamppost, encountered as the children exit the wardrobe into the snowy woods of Narnia, was included in this version of the tale. They were also awed by the simplistic characterization of Aslan and found a scene where the Pevensie children were climbing a mountain with just a simple rope particularly entertaining.

While many of the complexities and storylines of the original tale understandably had to be left out of this one hour performance, my children and I found this rendition of the wintertime classic to be relatable, interactive, and amusing. 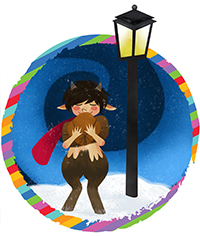