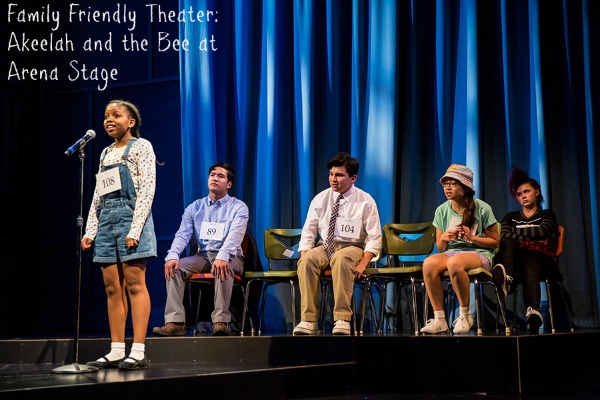 AKEELAH AND THE BEE, now running at Arena Stage through December 27, 2015, is a joyous, moving tale 11-year-old Akeelah Anderson’s improbable rise from an impoverished neighborhood to the national finals of the Scripps Howard Spelling Bee.  The play, adapted by Cheryl L. West from the 2006 film of the same name, follows Southside Chicagoans grappling with forces greater than any them. Akeelah, played with great skill by Johannah Easley, struggles with her genius and must decide whether to smother or cultivate her gift; her brother struggles with the lure of gangs and crime; their exhausted, widowed mother struggles to keep her children safe from the gunshots they hear outside their window.  A small cast of supporting characters turn the spare sets into a poor but proud streetfront.

West’s previous Arena Stage production, PULLMAN PORTER BLUES, brilliantly highlighted a largely forgotten aspect of black life in the 20th century, African-American railroad car porters who midwifed the Great Migration of blacks from the rural South to the urban North and who formed the seed for the Civil Rights Movement that followed.  As in PULLMAN PORTER BLUES, West’s AKEELAH AND THE BEE succeeds best when characters struggle to maintain their dignity in the face of impersonal, institutional forces of racism; both plays falter somewhat with the introduction of actual racist characters.  In “Akeelah,” the Asian-American father of Akeelah’s fiercest spelling bee competitor spends most of the play displaying a cartoonish bigotry while bordering on a stereotype himself, of the Asian-American tiger parent.  Despite that minor flaw, AKEELAH AND THE BEE is an inspiring piece of theater that’s perfect for a holiday outing for the entire family.

If you want to make a whole night of the performance, make sure to eat at Arena Stage’s Catwalk Cafe, which features a show-inspired menu. Our daughter loves to have dinner there before the shows.