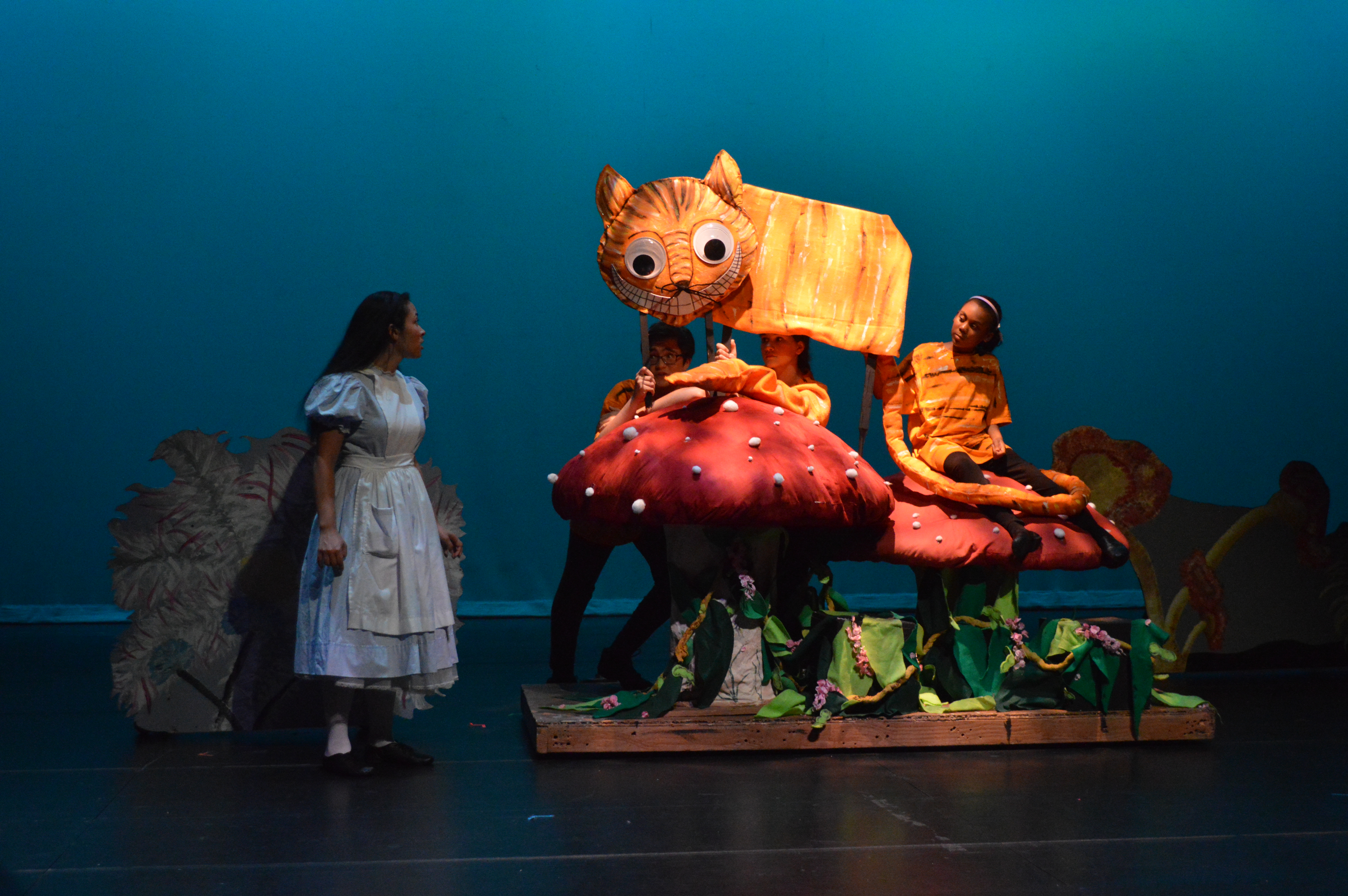 Describing what Alice in Wonderland is about can be challenging in terms of storyline, but the lush production at Arlington’s Encore Stage & Studio was a feast for the eyes. If all dreams and fantasies could be so fanciful and colorful, who would ever want to wake up!

My almost five-year-old daughter turned to me giddily exclaiming each time Alice progressed from one “square” of the chess board to another, getting closer to completely the quest for her crown and, by extension, getting closer to returning home. The illogic inherent in Lewis Carroll’s fantastical fish-out-of-water story caused my little girl nary a concern. After the fact, she mused, “I wonder what the rabbit was late for,” but during the show, she just enjoyed being transported to another world, complete with talking animals, flowers that can walk, and cards that play croquet. 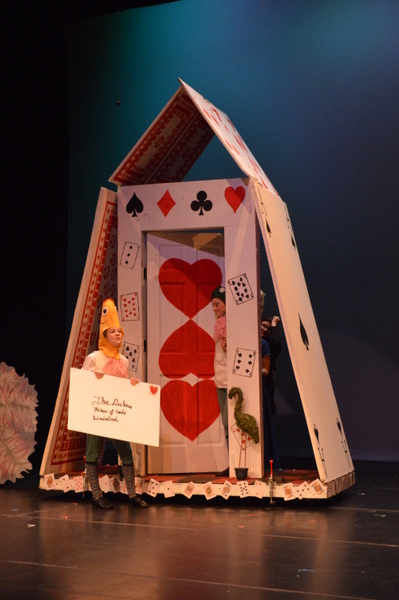 I realized on the way to the show that, having only seen a musical version of the play over 30 years ago and having never read the Alice story in any form, I was unprepared to tell my daughter what to expect. Fortunately, that didn’t matter! She just took it all in. Younger children at more of a “why” phase or older children too used to linear narratives might ask more questions, and I imagine my older son, already perhaps too analytical, might have similarly tried too hard to figure out the quirky story. But that would have been missing the point!

Regardless of how literal you are your kids are, it’s easy to cast aside expectations for a clear narrative in a production this pretty to look at. The sets were beautifully painted, and the stage transformed convincingly into a forest. 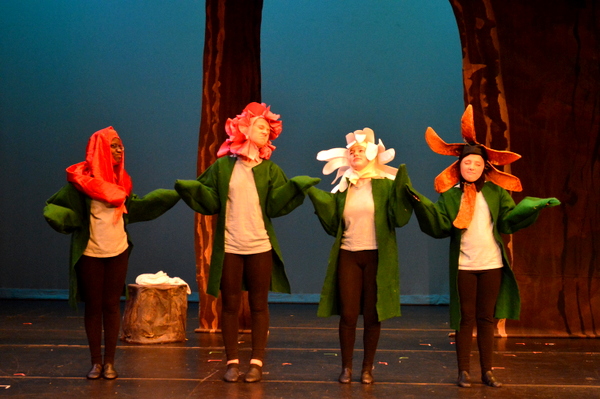 The vibrant colors of the set pieces and the grandeur of the trees during the forest scenes truly did make us feel like we were in a wonderland. 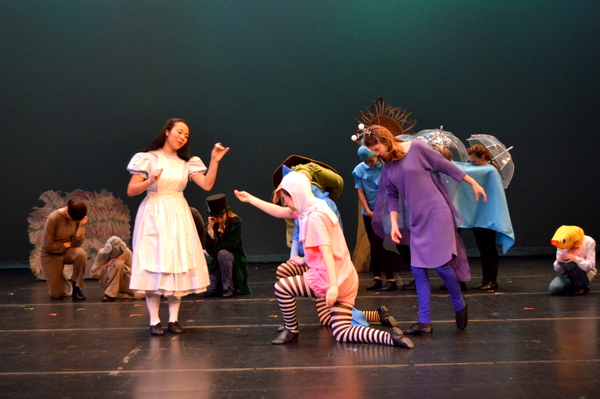 The able acting also helped us settle easily into this other world. Washington-Lee senior Brandi Moore was captivating as Alice in a strong and confident performance, and she was supported by an equally enthusiastic cast. 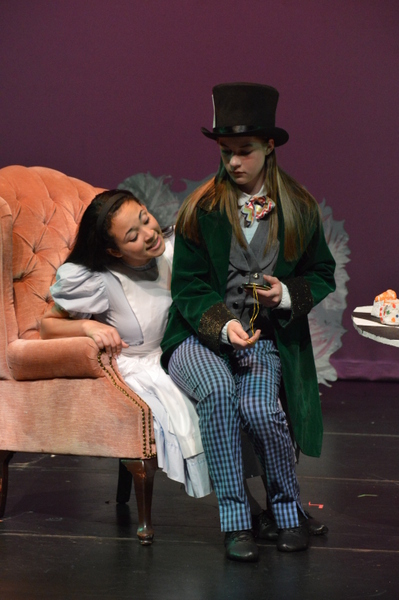 Encore bills itself as theatre “by kids, for kids,” and inherent in the experience is learning. Some of the children on stage are having their first public performance, but I am always amazed at how well they do. Many have participated in Encore’s summer camps or camps and classes offered during the school year where they have had ample exposure to practiced and improvised performance. The members of the Alice cast were thoroughly comfortable on stage when I saw them Sunday, just about halfway through their run, which ends Sunday, June 14.

This version is not a musical, but it does have some musical elements. The pacing is brisk and there is always something interesting to look at or some character inexplicably rushing or chasing something.

I left inspired by the performance to do some more reading. I might start by listening again to the recent a readers’ review of the book on The Diane Rehm Show. I am also going to check out the upcoming review in the Washington Post’s Book World of The Story of Alice: Lewis Carroll and the Secret History of Wonderland by Robert Fairhurst.

No matter what your background knowledge is of Alice, Encore’s production is likely to provoke a sense of wonder.

This performance is recommended for ages 4 and up. There were no alarming elements that scared my child; she was excited by a character running through the audience!

Before the final performance, there is a “Mad Hatter’s Tea Party” at 2:00 on Sunday, June 14 with tea and treats, fun activities and a chance to meet Wonderland characters. Actors usually stick around after the show to autograph programs, but seeing them before you see them on stage would be a special treat! 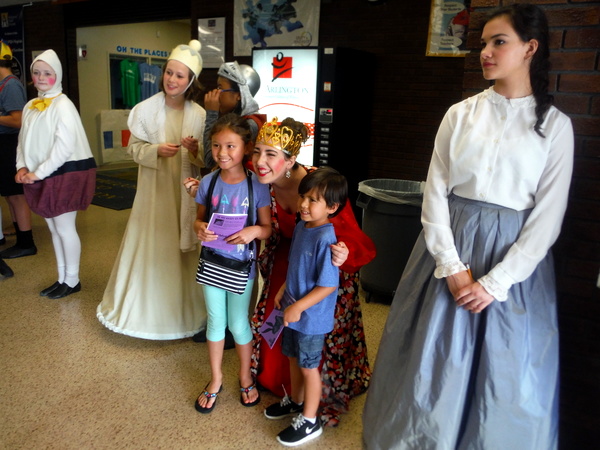 Space is still available in many of Encore’s summer camps in Arlington.

Disclosure: I was offered two tickets to review the show. All opinions are my own.

Jessica Claire Haney is a writer, editor and mother of two who lives in Northern Virginia. She is founder and editor of Mindful Healthy Life of Metro DC, an online lifestyle magazine for natural-minded parents with a blog, resource directory and calendar. Her personal blog is Crunchy-Chewy Mama.