Disney’s Newsies: We Clapped with Hundreds to a Standing Ovation

Disney’s Newsies: We Clapped with Hundreds to a Standing Ovation 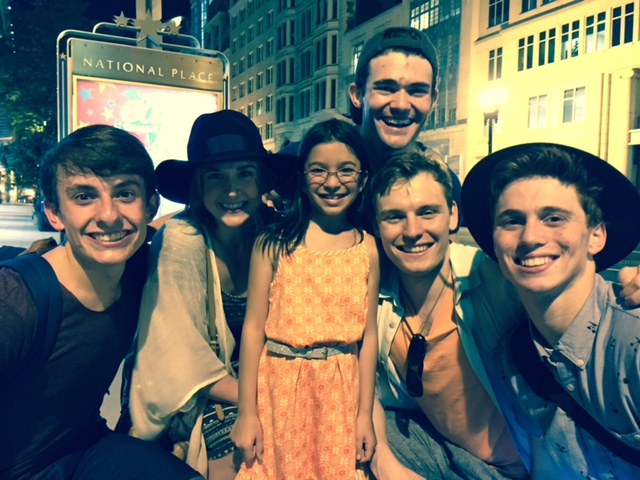 My eight-year old daughter was on the edge of her seat for the entire performance of Disney’s NEWSIES, which opened on June 9, 2015 at the National Theatre. We clapped wildly for the story line, the singing, the theatrics, and the leaping and bounding of dancers kicking their heals up in ballet form, tap dance, and gymnastics flipping. Performers Dan DeLuca as Jack Kelly, Zachary Sayle as Crutchie, Stephanie Styles as Katherine, Nico DeJesus as Romeo, all of the cast, truly, were superbly cast. My daughter gave only a few “eeeews” to the romantic kisses that cemented that love is for those that embrace living fully.

The music was lively and live — after the show the guitarist showed us the five different guitars he played over the course of the performance. In the orchestra there were also saxophone, trumpet, Flugel, keyboard, drums, and bass.

Dancers, singers, and musicians were in perfect time. The audience let Newsies know we loved them – we clapped with hundreds in a standing ovation.

My daughter is a history buff and recounted on the metro ride to the National Theatre that as a girl, First Lady Eleanor Roosevelt and  her father would feed hungry Newsie boys over Thanksgiving holidays. For my daughter NEWSIES was a way to connect to the poverty of the times and the spirit and power of youth to make systemic change. NEWSIES was believable and engaging and an absolute delight. 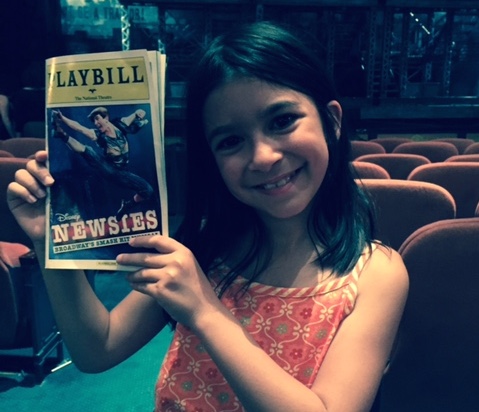 We stayed later than anticipated to greet the stars of NEWSIES at the stage door. Like Vincent Crocilla, who played “10 year old, well almost” Les, my daughter found out that independence, good cheer, and a little crowd management can get you to the front of the stage door. We collected autographs from the performers who greeted us with cheer and energy – they knew the nailed the performance too.

From start to finish our experience with the National Theatre was tops. We got to the National Theatre just as the curtain was going up on the first of two Acts. Theatre staff positioned us in the back so that we wouldn’t miss a beat of the performance and then got us to our seats. It was Officer Smallwood that got my girl her Playbill so that she could collect signatures after the performance.

As we rode home, Anjali’s excitement was palatable and infectious. Hearts and Spades musician Evan Eisenberg overheard us talking. NEWSIES was his favorite at seven, some twenty years ago. He has company, I am sure: NEWSIES will stay with us for years and years to come.