Medieval Times’ Baltimore Castle is offering families — and anyone else interested in attending — a special Spring Break deal valid only until April 12th. From now until the end of the promotion (also the end of local Spring Break season), you get Buy One Get One Free pricing*. Since Medieval Times is a splurge for some families (but in keeping with the cost of most live performances/theater tickets). 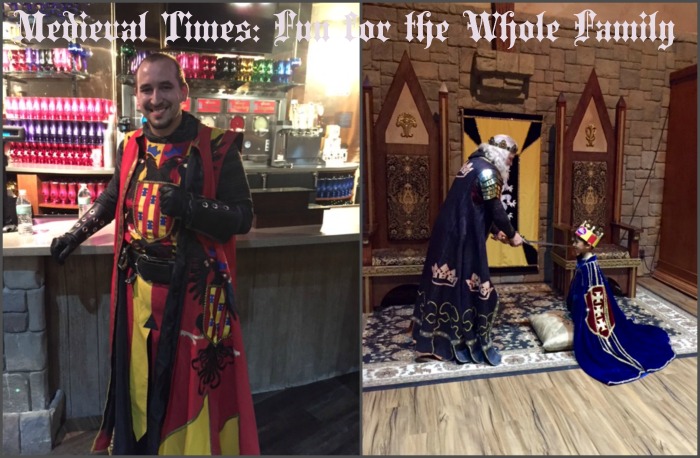 We were offered a complimentary general admission visit to Medieval Times in exchange for this review, but since it was my youngest son’s 7th birthday, we paid for the upgrade to the Celebration Package ($16 p/p). The Celebration upgrade offered us better seating (we lucked out with the first row), my son’s name mentioned during the show, and a free group photo (worth $20) for each member of our party. Of course, our party was just our family, so we plan to send the other copies of that photo to far-flung grandparents and other relatives.

You’re asked to arrive to the Medieval Times Castle (located in Arundel Mills Mall) between 60 and 75 minutes early (so for our 7:30 show, we arrived at 6:30). Once you arrive, you check in (at which time you may upgrade your tickets if you choose), receive a paper crown sporting the Knight you’ll be rooting for (and the section you’ll be sitting in) and then have plenty of time to browse the gift shop, grab a drink of honey meade, sangria, wine, beer, slushies, or cocktails, and watch the Knighting Ceremonies. We also received a complimentary Knighting Ceremony ($20 upgrade for the person being knighted) for my son, and it was so much fun.

The “King” called out his name, draped him in a cape and had him kneel on a cushion. The King then “knighted” my son and announced he was henceforth Sir Jonah.

A little bit after the Knighting Ceremony, we were ushered inside for the Feast and Tournament. We sat in the front row of the red and yellow knight’s section and waited for the festivities to begin. My daughter, who is 10, is a vegetarian, so she was served first. While our Medieval-inspired meals consisted of garlic bread, tomato bisque soup, roasted chicken, spare rib, herb-basted potato, a pastry, and beverages (I splurged for a Sangria, but the free beverages are limited to Pepsi or iced tea), my daughter had pita chips and hummus with raw vegetables; the tomato soup and bread; and a rice and bean stew. There are no utensils at Medieval Times for the regular meals, but the vegetarian main course did come with a spoon. Because we had upgraded to the Celebration Package, we also received cake on top of our pastry dessert.

The tournament was a lot of fun — my husband said it was like watching a WWE fight — you know it’s scripted, but you have a blast watching it all play out anyhow. Our Knight actually ended up winning, and my son said he’d never forget how “his knight” (in the photo above) won on his birthday. My kids, who are 7, 10, and 13 (and believe me, it doesn’t take much for my 13-year-old to declare something lame) all want to return, and we noticed that there was a Girl Scout Troop there (Scouts and other groups can receive special pricing) as well as extended families with everything from babies and toddlers to high schoolers. Just make sure to look for the Special Offers, because the more you save before you go, the more you can say “Yes” to one or more of the extras available at the Castle.

*Must mention or enter code SBWEB15 at time of purchase. Buy one full-priced adult admission, and receive the second admission of equal or lesser value FREE. Not valid with other discounts, offers, or group rates. Upgrade packages, tax, gratuity, and applicable fees are additional. Restrictions may apply. Valid only at the Maryland location thru 4/12/2015.

As mentioned, my family received free general admission and one Knighting Ceremony, but we paid for our Celebration Upgrade, drinks, and the shield and sword our birthday wanted. Many thanks to Medieval Times Baltimore for the birthday night to remember!