Blue: A Show for the Littlest Theatergoers at Imagination Stage

Blue: A Show for the Littlest Theatergoers at Imagination Stage 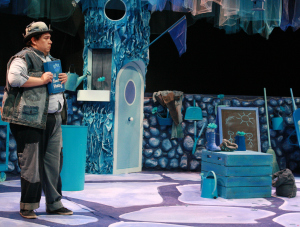 Preschoolers are creatures of habit, or at least both of my children have been during their preschool years. All it takes is one slightly late lunch or missed nap and suddenly the whole world has been turned upside down. In its latest show for young children, Imagination Stage explores a world turned on end by one small change.

Inky and Pale Blue live in a world with only one color: blue. The two live in a blue house, pick blue vegetables, and grow blue flowers together…until one day something red appears. Playful Inky wants to keep it, but cautious Pale is frightened and wants to throw the red flower out. What will the two friends do? How will their blue world change? 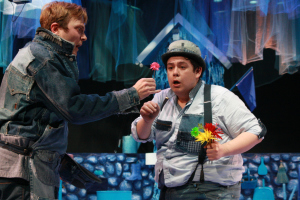 In its Imagination Stage premiere, Blue tells a story of colors, tolerance, and understanding. Written by Annie Cusick Wood and directed by Kathryn Chase Bryer, this interactive show was first produced by Honolulu Theatre for Youth, and takes place in a world where blue is the only color.

Blue is part of the My First Imagination Stage series, aimed at children ages 1-5. If taking such a young child to a play sounds intimidating, know that these productions are designed with the littlest theatergoers in mind. Shows are staged in the round in a small, cozy theater, with children seated in a circle at the edge of the stage with adults seated right behind them. My First Imagination Stage shows frequently include audience participation for those who want to join in – and even parents get in on the act depending on the show!

I took my three year old son to see Blue, and he and the rest of the young audience spent much of the show laughing. There was a chance for children to join the actors onstage for a play session during the show, and I may have had to pick my budding artist up to make sure other kids got a turn at the easel. When I asked him what part of the show was his favorite, I got a surprise. I was sure coloring on the easel would be his favorite, and instead it was, “when something was RED!”

All photos by Lauren Alexander courtesy of Imagination Stage

Imagination Stage provided us with tickets to the show – all opinions are my own. Allison writes about life at home in the Maryland suburbs at Home and Never Alone.