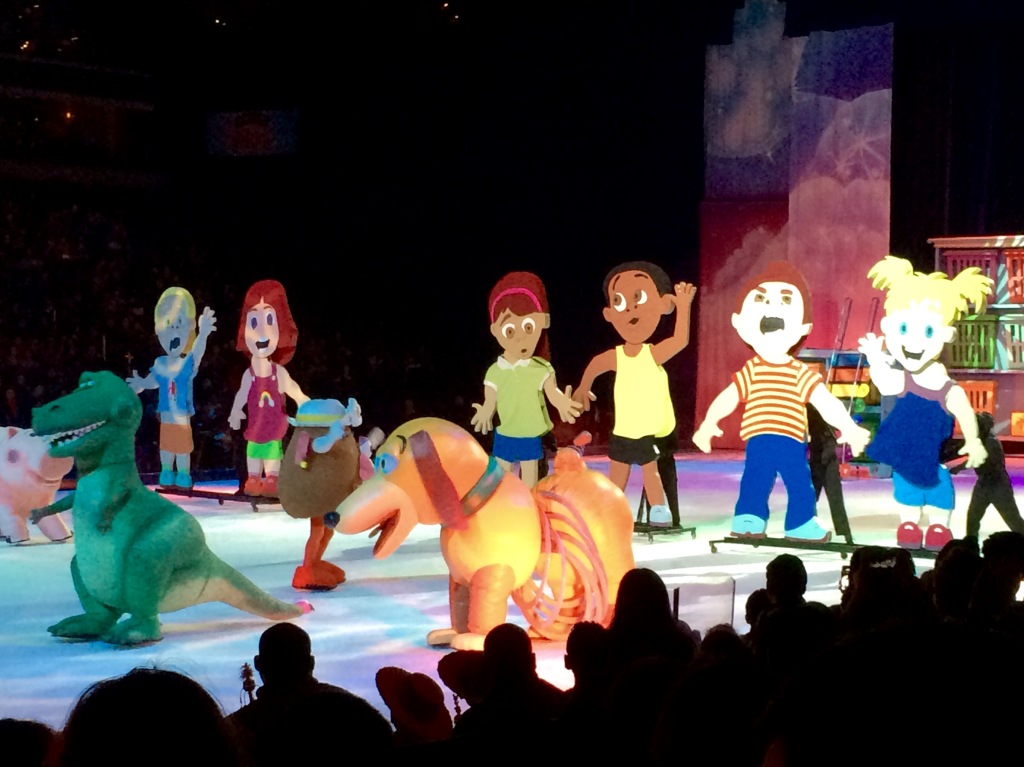 I am a Feld Family Ambassador, and in exchange for my time and efforts in attending shows and reporting my opinion within this blog, as well as keeping you advised of the latest discount offers, Feld Entertainment has provided me with complimentary tickets to Feld shows and opportunities to attend private Feld pre-Show events. All opinions are my own.

This post was written by my husband, who took the kids to see the show last night. I thought you’d appreciate a dad’s perspective on Disney On Ice!

Disney On Ice presents Worlds Of Fantasy has skated into town to enthrall and enchant audiences. While the latest show has some new features, the best parts of the evening still come from the good, old-fashioned spectacle of an ice show.

As with previous Disney On Ice shows, skaters reenact beloved Disney feature films, and this show adapts The Little Mermaid, Tinker Bell, and Toy Story 3. But Worlds of Fantasy includes something new: life-sized versions of Lightning McQueen, Mater, and several other Cars characters driving around on the ice.  But while the cars are pretty enough recreations of the animated originals, the most entertaining parts of the show still involve the imaginative ice skating that make this form of live entertainment so unique. 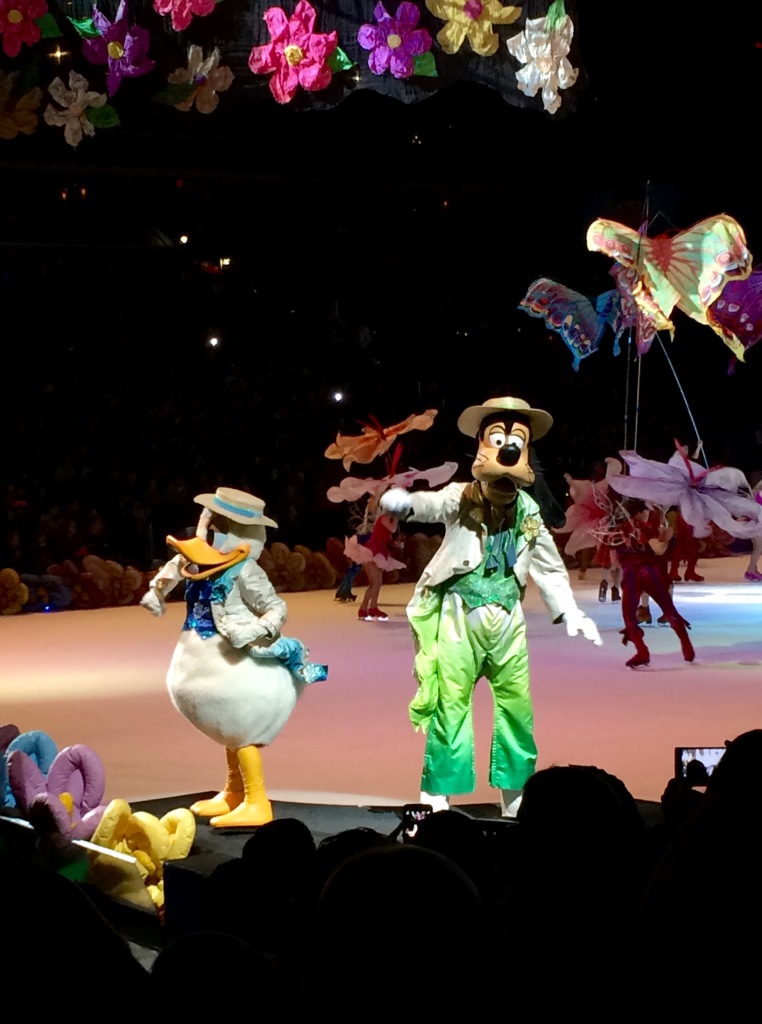 Ariel, thus, once again gives up her voice and mermaid’s tail (and feminist sensibilities) for Prince Eric, and the couple’s pairs skating elicit ohhs and ahhs from even the youngest audience members, including the 18-month old In the row in front of me wearing a newly purchased souvenir Elsa cap (golden braid included). Sebastian the Crab (like many cast members, a skater in a heavy costume) works the crowd, encouraging the audience to clap, sing, and dance along, although most kids seemed too enraptured by the show to get out of their seats.

After a spectacular finale to The Little Mermaid segment, the cast dons their fairy wings for a rendition of Tinker Bell. Here, the show drags a bit.  Because the cast of fairies aren’t household names, and because their movies aren’t as well known as other Disney films, the show takes time to introduce each fairy, time that’s devoted to skating and storytelling in The Little Mermaid and Toy Story 3 segments. 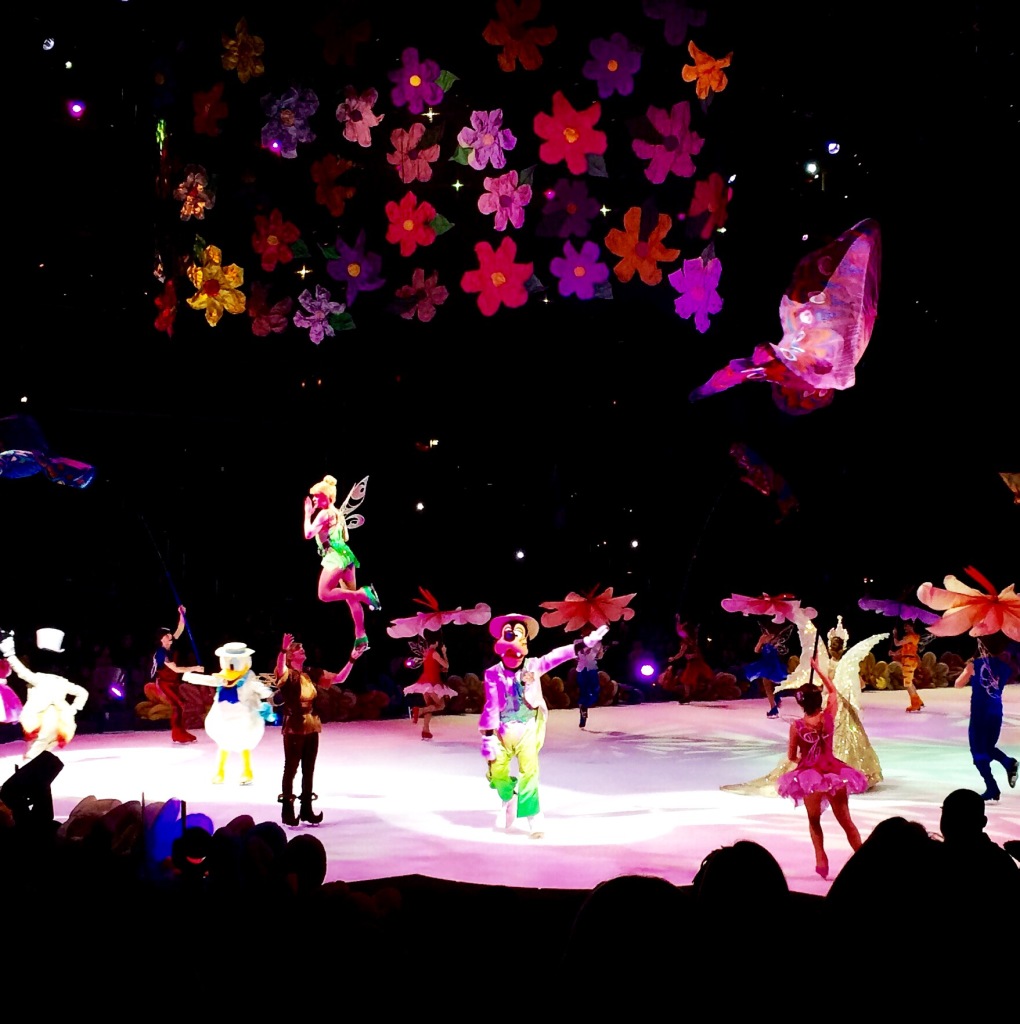 The storytelling comes to the fore in the second act (the two hour show has a brief intermission). A highly choreographed corps of toy Army men, dressed entirely in monochromatic green (including opaque green face masks) sandwich a fairly faithful, if abridged retelling of Toy Story 3. Ken and Barbie earn the applause for their pair’s skating in the second act (since there’s only so much skating to be done by two cast members in a dog costume connected by a slinky). Ken (or multiple Kens) also perform a quick-change fashion show bit that captures the silliness of the character from the movie.

The best parts throughout the show are the things that make a live ice show unique: the costumed Army men, the cleverly oversized sets in Andy’s bedroom, the elaborate undersea costumes and skaters carrying puppets of all kinds around the ice (keep your eye out for the two-person seahorse puppet during The Little Mermaid finale).

That may be why the Cars bit was a bit underwhelming. The segment was simply Cars characters on ice. No skating, no costumes, no puppets or ribbons. Although Lightning McQueen gets a roar from the audience when he drives out onto the ice, there’s little for him to do once he’s out there besides drive in circles with Mater and a few other full-sized Cars replicas. My daughter said she spent the segment trying to look through the car windows to catch a glimpse of the drivers inside. My son, being a vehicle lover, enjoyed it, however, so it’s clearly for the die-hard Cars fans.

The rest of the show swept them up into some of their favorite fictional worlds with great skating, beautiful costumes, and the storytelling that Disney does so well.

Disney on Ice  presents Worlds of Fantasy runs through February 16 at the Verizon Center in Washington, D.C.