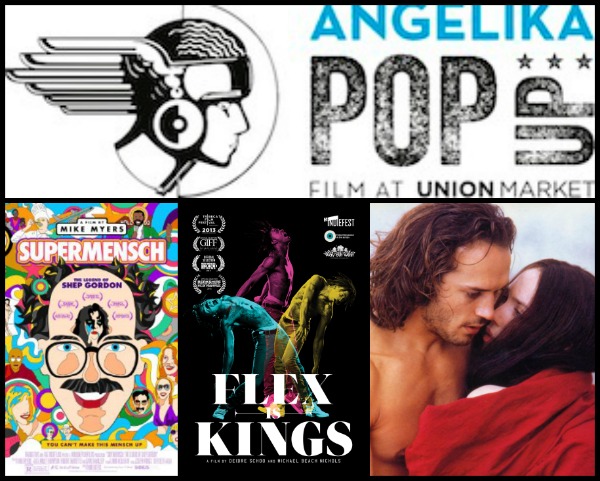 Today an exciting new theater opens in the District, the Angelika Pop-Up in Washington DC’s NoMa neighborhood behind Union Market. I was lucky enough to take a tour of the three-screen theater and was impressed by the facility, the location, and the programming of the theater. Anyone lucky enough to live near the Angelika Film Center’s Mosaic location must know what an amazing cinema it is, how committed it is to curating exceptional films, bettering the community and and offering a film-going event that goes beyond the regular corporate multiplex.

At the Angelika, everything from the assortment of artisanal concessions to the bathroom decor and family-friendly amenities is carefully considered and made for a movie-lovers’ comfort. In particular, I’m impressed that the Angelika Pop-Up will offer Crybaby Matinees every Wednesday from 12 to 2 PM for parents and their babies. So those of you who are sick of streaming your films on the Roku or laptop or Apple TV can finally bundle up your babies, head to NoMa, see some quality independent films, and then go to Union Market for good eats or maybe just an excellent cup of coffee at Peregrine Espresso.

Since my kids are 6, 9, and 12, I’m long past the Crybaby stage, but I look forward to going to the Angelika for a date night or a mom’s night out. My husband and I already plan to see Queen Margot, which I remember seeing my first year in college but haven’t seen since. So if you appreciate wonderful films, cool neighborhoods, and good food, visit the new Angelika Pop-Up!

The Angelika Pop-Up is located at 550 Penn Street NE (between 5th and 6th Streets NE), just one block north of Union Market, and next door to Gallaudet University and the new Dolcezza Gelato Factory. Free parking is available in the parking lot directly in front of Union Market. Additionally, the NOMA Gallaudet University Metro Station (Red Line) is a short walk up 6th Street to the Angelika Pop-Up.

Here are some of the upcoming films scheduled to open at the Pop-Up:

Supermensch: The Legend of Shep Gordon – Opens June 13 – Opening Week Film
In his directorial debut, Mike Myers documents the astounding and moving career of Shep Gordon, the consummate Hollywood insider.  A career that began with a chance encounter with Janis Joplin and Jimi Hendrix, Shep went on to manage the careers of Alice Cooper, Blondie, Luther Vandross and Raquel Welch. He even found time to invent the “Celebrity Chef” with his representation of Emeril Lagasse.  Personal friends with the Dalai Lama through his philanthropic endeavors with the Tibet Fund and the guardian of four children, Gordon’s unlikely story is told by Alice Cooper, Michael Douglas, Sylvester Stallone, Anne Murray, Willie Nelson, Emeril Lagasse and more.
Queen Margot – 20th Anniversary Directors Cut – Opens June 13 – Opening Week Film
Cohen Media is re-releasing the complete uncut version of Patrice Chereau’s Queen Margot, the acclaimed 1994 tale of intrigue and forbidden love based on the 1845 historical novel by Alexandre Dumas.  Winner of the Jury Prize at the 1994 Cannes Film Festival and five César Awards, this powerful and sexually charged film stars Isabelle Adjani, Daniel Auteuil, Virna Lisi and Vincent Pérez.  Set during the late 16th century, when Catholics and Protestant Huguenots are battling over control of France, Catherine de’ Medici (Virna Lisi), a scheming power player, makes a show of goodwill by offering up her daughter Margot (Isabelle Adjani) in marriage to Henri de Bourbon (Daniel Auteuil), a prominent Huguenot and King of Navarre.
Flex is Kings – Opens June 20
Filmmakers Deidre Schoo and Michael Beach Nichols deliver an inspiring social and cultural documentary about the community behind the contemporary urban dance movement, called “flexing,” in the Brooklyn neighborhood of East New York.  Shot over two years, the filmmakers explore the hopes and realities of the under-acknowledged and totally unfunded group of Brooklyn artists behind the competitive dance style that combines dramatic contortions, simulated violence, and flowing footsteps that are at once flights of fancy as well as poetic evocations of the streets.
Violette – Opens June 27
An official selection of the Toronto International Film Festival, César Award winner Martin Provost’s Violette spans 20 years in the complex life of trailblazing French feminist author Violette Leduc, and her relationship with the legendary Simone de Beauvoir. Born out of wedlock in the early 20th century, Violette (Emmanuelle Devos, in a searing performance) encountered Simone de Beauvoir post-WWII in St-Germain-des-Prés. The intense relationship between the two women would last their entire lives – a relationship based on Violette’s quest for freedom through writing and Simone’s (Sandrine Kiberlain) conviction that she held the fate of an extraordinary writer in her hands.