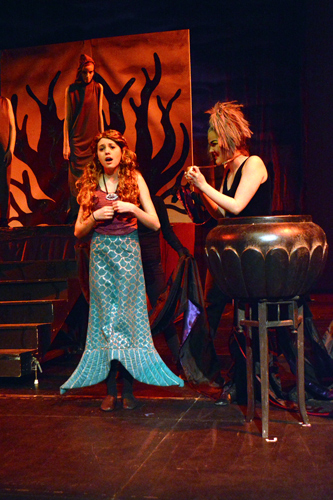 Arlington’s Encore Stage and Studio has managed to deliver a fantastic performance of the Little Mermaid, Jr. When I saw the show on Saturday afternoon, the theater was nearly sold out – so snag your tickets for next weekend fast!

Little Mermaid, Jr. follows the classic storyline where Ariel, the mermaid princess, must ransom her singing voice in order to live in the world above, rather than the ocean floor. She must convince Prince Eric to fall in love, or risk losing her voice forever. The actors conveyed the perfect amount of tension in Act 1, as Ariel was lured in by the amazing Ursula, played by Maddie Ashton. Her evil performance was easily the highlight of the show. The show moves quickly and can keep the attention of all ages – without getting confusing. The second act opens with a little comic relief where Sebastian (played by Rebecca Joskow) gets to shine. But the whole cast delivers a performance full of energy and fun, which really drew the crowd in.

The only annoyance in the show is the large amount of time the theater is dark as sets are switched back and forth – but the sets are fantastic and reflect a great imaginative eye. I’m sure I’ll see elements of them in my daughter’s play in the coming weeks. At age 6, she could easily tell when the actors were underwater and when they were on land.

Get tickets for remaining shows at the following links:

The show is rated for children ages 4+. I agree with those age boundaries and think a lot of children will be inspired to think about theatre after seeing this performance!

I received 2 complimentary tickets and was asked to write a review of the performance. All opinions are my own.

Elaine hopes to one day see her own daughter on stage at Encore, and has already enrolled her in theater classes there – which her daughter loves! She writes about her children over at Connor and Helen Grow Up!