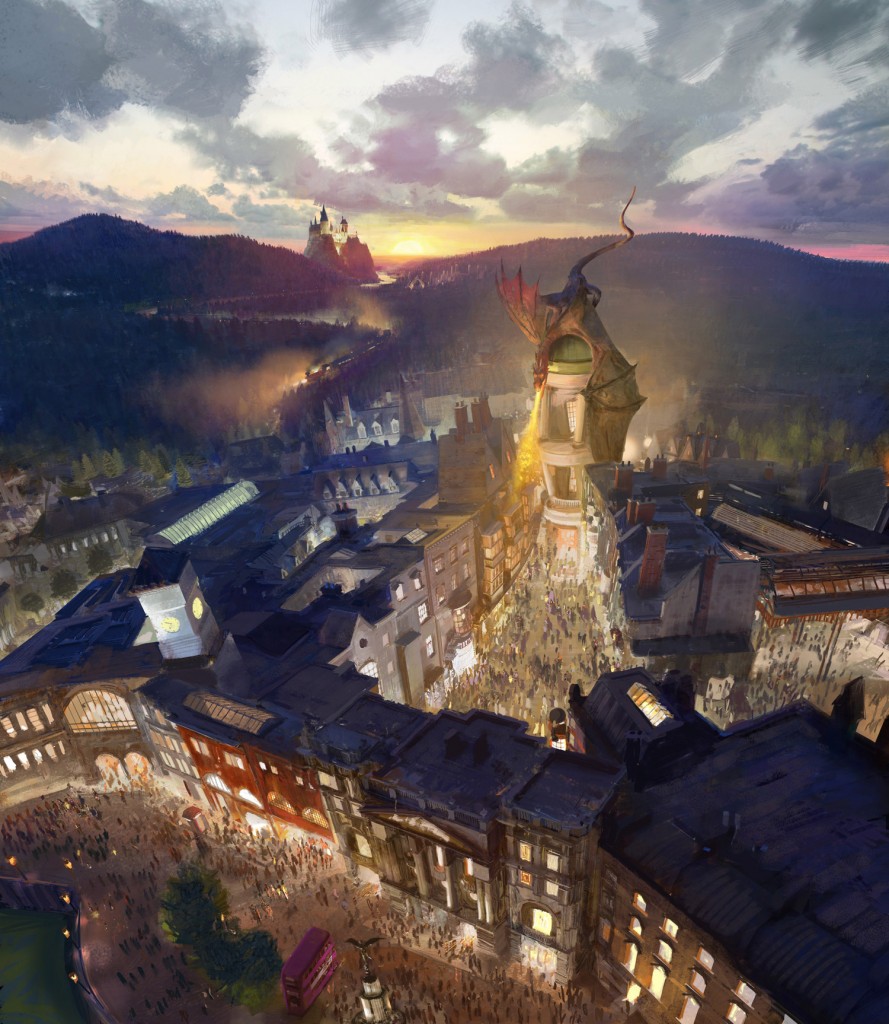 This year is a fabulous time to visit Universal Orlando Resort. Not only is there a new budget-minded ’50s-themed resort opening in March called Cabana Bay Beach Resort, but the Wizarding World of Harry Potter is being expanded to include the brand-new attraction of Diagon Alley. “Harry Potter” stars Matthew Lewis (Neville Longbottom), James Phelps (Fred Weasley), and Evanna Lynch (Luna Lovegood) joined Universal Orlando executives to announce Diagon Alley details yesterday. Here are 10 reasons that families should check out Diagon Alley (which is opening this summer on the Universal Studios side):

1. Hogwarts Express: One of the most amazing parts of the new Diagon Alley attraction is the Hogwarts Express which families can take from the King’s Cross station in London at Universal Studios to the Hogsmeade station in the Islands of Adventure side where the existing Wizarding World of Harry Potter is right now. Families can board the train and go from one to the other. Imagine going on a replica of the train that took Harry, Ron, Hermione and their pals to Hogwarts!

3. Knockturn Alley: J.K. Rowling’s series is deeply interested in the nature of good and evil and all the shades in between, so it’s only fitting that Universal is not only going to feature Diagon Alley but also its shadier section, Knockturn Alley — where all the Death Eaters like to hang out. Families who want to get their Bellatrix and Lucius on can shop like a follower of He Who Shall Not Be Named (or just the Dark Arts) at Borgin and Burkes.

4. Weasleys’ Wizard Wheezes:  I’m a Ron Weasley fangirl, so I’m especially excited that in addition to Zonko’s, there will now be a WWW at Universal. Phelps, naturally, said seeing it was his favorite part of the new Diagon Alley, since it’s his (and his identical twin’s) visage that is visible on it. Families can buy potions, gags and toys such as Pygmy Puffs and Amortentia (love potions).

5. Scribbulus Writing Implements: I have many friends who’ve called me Hermione-esque. I don’t need a Facebook meme to tell me so, and  as someone who LOVES books and papers, this is obviously one of the iconic Diagon Alley shoppes. Other popular Diagon Alley shops include Madam Malkin’s Robes for All Occasions (where I’m sure you can buy Hogwarts robes, uniforms, and a several-hundred-dollar replica of Hermione’s Yule Ball gown), Quality Quidditch Supplies for — what else? — Quidditch gear, Wiseacres for star charts, and Ollivander’s.

6. Leaky Cauldron: My family is very wary of amusement-park food, but Universal (like Disney) has some wonderful restaurants and food courts to choose from, and now we can add the Leaky Cauldron to the many places to eat while at Universal. In addition to having an ice-cold (or frozen) Butterbeer, you can sit down at Diagon Alley’s most popular pub/inn in Diagon Alley and have traditional English pub fare and other Potter-familiar treats (the menu is still being finalized).

7. Florean Fortescue’s Ice-Cream Parlour: Speaking of food, if you’ve already eaten at Mythos or Springfield or one of the many other eateries, you can still order a Wizarding dessert at Fortescue’s, that will feature unusual ice cream flavors. Of course, die-hard Potter readers know that poor Mr. Fortescue was dragged out of his shoppe by Death Eaters, but his legacy will live on forever at Universal Studios Orlando!

8. London waterfront: Since Diagon Alley is the hidden magical shopping area “behind” London’s muggle world, Universal also recreated the look and feel of London. The creative team made sure to keep an authentic feel to the facades of London buildings and even measured the structures to make sure they were accurately recreated.

9. The Gringotts Dragon: The dragon is loose, and he will breathe “fire” on a regular basis.

10. The Knight Bus: I love the story of the Knight Bus, and the triple-decker wizarding bus will be parked right there for everyone to take a photo op with when they visit Diagon Alley.