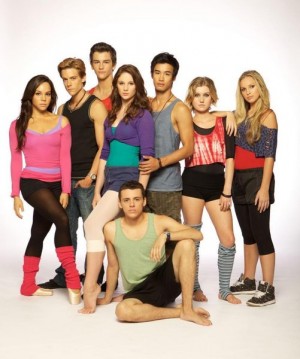 Last week, I became addicted to a new show. It all started when I was desperately searching for a cute Asian actor to include in a story about the upcoming adaptation of the YA trilogy “The Infernal Devices” by Cassandra Clare. I had a lot of trouble finding teen/early 20s half-Asian actors on IMDB, so I asked the Twitterverse, and two friends recommended Jordan Rodrigues from Australia’s hit teen show “Dance Academy.” I’d never heard of it, but apparently it’s on Teen Nick here in the States.

My trusted friend Alli suggested I watch it on Netflix to check out Jordan’s performance, so I watched one episode and then figured, let’s go for two, and soon enough, I couldn’t stop watching. It’s like “Glee” but with dancers instead of show-choir singers, and it takes place at the fictional National Dance School of Australia, a boarding school for elite high-school ballet dancers in Sydney. The cast, above, isn’t quite as diverse as “Glee,” but there is a Jewish kid (Sammy), a country mouse in the big city (Tara), two rich half siblings (Kat and Ethan), an overly competitive, Hermionesque girl who only lives for dance (Abigail), and Jordan’s character Christian, whose had a tough life — dead mom, deadbeat dad, juvenile record.

The show is chaste enough for mature tweens and all teens. There are lots of crushes and some kissing scenes, as well as a couple of end-of-term experiments with alcohol, but it’s a great show that deals with various adolescent issues. In fact, if you let your kid watch “Glee,” then “Dance Academy” should be a no brainer; there’s a lot less sex and innuendo on “DA” than the kids at McKinley High get up to! Plus, the dancing is remarkable: all of the leads are actual dancers, and it’s inspiring to watch teens so committed to such a rigorous art form.

Between the earnest teen emotions, the frequent moments of humor, the adorable romances,  the awesome dance sequences and the gorgeous background shots of Sydney — I was hooked! So if you’re looking for a TV show to explore with your tween or teen (particularly girls!) this summer, check out “Dance Academy.” If you don’t have TeenNick or Netflix, the first two seasons come out on DVD tomorrow, May 14. I can’t wait for season 3, which airs in Australia this summer!

When she’s not letting her inner teenager pick her shows, books, and movies, Sandie blogs about Young Adult literature at Teen Lit Rocks and reviews movies and books at Common Sense Media.