Mother and Son Date: “Jason Invisible” at the Kennedy Center

Mother and Son Date: “Jason Invisible” at the Kennedy Center 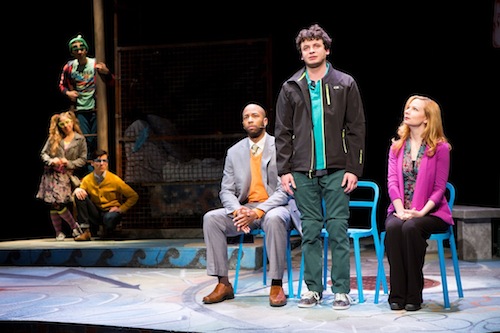 My son is now 11, and one thing we’ve noticed is that he’s no longer as thrilled to go to the children’s theater performances that used to wow him even a couple of years ago. He’s a tween, and he told us after a fun afternoon at a children’s play that he liked it “OK,” but that it was more fun seeing his 5-year-old baby brother react to the play than the performance itself. So when the Kennedy Center offered us two tickets to see their new 11-and-up Family Theater play, “Jason Invisible,” he was so excited to go with me.

The play is an adaptation of the young adult novel “Crazy,” by Han Nolan. It follows 15-year-old Jason, whose mother has died and who is taking care of a father battling mental illness. Because Jason promised his dearly departed mother that he would watch over his father, he tries to stay under the radar at school (lest he be forced to share his family secret) and only confides in his three imaginary friends: Dream Girl, Smart Guy, and Crazy Glue. But things change when a teacher forces Jason to attend the school counselor’s group sessions, where he’s flung together with three actual kids (played by the same actors as the imaginary friends) who have their own family issues (divorce, a dying parent, addiction) at home.

Because of the more mature subject matter (mental illness, therapy, loneliness, etc.), the play is perfect for tweens and teens. It makes audiences think about whether it’s right for people to betray their friends’ secrets if it means helping them in the long run. At the end of the performance, the characters (who occasionally break the fourth wall) ask for audience participation to discuss friendship issues. After the curtain call, my son and I spent the ridiculously long drive back home talking about the play and the adolescent issues it explored. I couldn’t have asked for a better mother-son date!

Many thanks to the Kennedy Center for offering me two complimentary tickets to see and review the play with my son.

When she’s not going on mother-son dates with her awesome tween, Sandie blogs about Young Adult literature at Teen Lit Rocks and reviews movies and books at Common Sense Media.