Watching the Oscars in DC

Watching the Oscars in DC

I have watched the Oscars live, from start to finish, since I was a young elementary school student. I think it was 1987, after I was deemed old enough to see (or sneak) “Broadcast News,” “Moonstruck” and “Empire of the Sun,” that I became passionate about quality films and the glamor of this annual event. Other people may have their Super Bowls, their Final Fours. But for me, the Academy Awards are my single, sacred television entertainment event, and I never miss them or head to bed before the last gold statuettes are handed out, the last publicist tearfully thanked.

The first time I watched the Oscars in Washington, DC was in 1999, shortly after moving to Dupont Circle from San Francisco. I was 23, living on a small Capitol Hill staffer salary in a miniscule studio apartment, and I did not own a television. Trust me, this was not that weird. I spent 12 hour days working at a computer with unlimited access to LexisNexis and a mini TV on my desk continuously spewing C-SPAN, so having a tube at home for information or entertainment seemed moot. Well, until it was time to watch The Big Show in a town where I did not know many people.

So, that Sunday I called the legendary Stetson’s, the U Street bar I had come to frequent with my co-workers and love for its casual, no cover nor pretensions atmosphere. I asked the manager if they could play on one of the screens the Oscars, and I would try and organize as many young women I knew to head down for several hours of vodka cocktails, light beers and quesadillas. He said that there was a big Capitals game going on at the same time so he couldn’t promise the main screen, but he could turn one of the smaller televisions to the show. Then I individually called (hey, this was before texting!) the young women I worked with about this impromptu Oscar party. 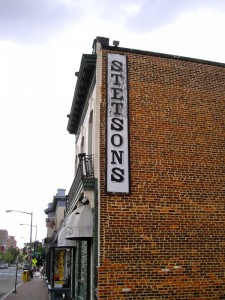 Looking for a fun Oscar party in the DC area for 2013? About.com’s Rachel Cooper has a fab round-up of DC-area Oscar parties and viewing venues.

Most of the gals headed out on the snowy night and joined me at the bar, and our debates on whether Gwyneth’s pink dress was pretty or prissy, if Roberto Benigni was adorable or annoying, moved the craggy Caps fans to encourage the manager to switch the Oscars to the main screen with full sound. By the end of the night we had these “Cheers”-regular types toasting us with tequila, weighing in on Elia Kazan’s controversial lifetime achievement Oscar, and clapping when “Saving Private Ryan” won Best Picture.

I have watched every subsequent Oscar ceremony from a perch in the DC area, which after 15 years is now officially my home. By 2000 I owned a TV, and by 2001 I had the great luck to meet a guy who has watched it with me every year since. This year I will watch the show in our house, on a HD screen that rivals the size of my 1999 studio, with the ability to hit “pause” when I need to pee or make us more popcorn. I will be able to read on various i-gadgets real-time Oscars commentary from friends and wisecrackers all over the country thanks to Twitter and Facebook.

But part of me feels like calling a babysitter, some girlfriends and Stetson’s, and seeing if they’ll put the biggest night in Hollywood up on the big screen for us, for old time’s sake.

Jessica McFadden blogs about DC-area family activities and resources at A Parent in Silver Spring, and parenting and shopping at A Parent in America. Her goal is to raise one of her three children to acquire a job that makes him or her an official member of the Academy (so Jessica can watch all of the screeners beforehand.)