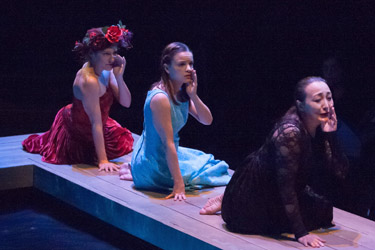 My husband and I spent Valentine’s Day evening at the press performance of “Metamorphoses” Arena Stage. He was so moved that he once again asked to write the review. –Sandie

With her revival of “Metamorphoses,” now playing at Arena Stage, playwright Mary Zimmerman once again explores the nature of storytelling with unrivaled imagination and brilliant stagecraft.  Her dazzling production reminds how words can move us, how myths shape us, how something as simple as lights on water can amaze us.

After “Metamorphoses” premiered in New York, a few weeks after September 11, 2001, Zimmerman won a Tony for best direction. The Arena Stage production shows DC audiences why. Metamorphosis engages a company of ten actors, in various roles, enacting the myths recorded by the Roman poet Ovid: Midas, Orpheus and Eurydice, Cupid and Psyche, and others. The actors unspool the myths, sometimes telling stories within stories, within a shallow pool that replaces the stage — crawling through it, falling into it, dissolving invisibly under it. The water, blank and dark, enhances the dreamlike performances.  One character, a psychoanalyst exploring the daddy issues plaguing Phaeton, son of the Son, recites Joseph Campbell to perfectly capture the effect Metamorphoses has upon the viewer: “Myths are public dreams; dreams are private myths.”

A note about age-appropriate content: for mature children, nearly all of “Metamorphoses” provides a compelling introduction into the tradition of Western storytelling.  One myth, however, involves Myrrha, cursed by Aphrodite with lust for her father. To her own horror (and the audience’s), she repeatedly succumbs to this divine perversity, depicted with a slow, highly choreographed, sensual embrace in the waist-deep water. Following that troubling tale comes the myth of Psyche and her lover Eros, who steps into the pool wearing his traditional blindfold and wings, but nothing else.  Children and anyone else easily distracted by male nudity may find it hard to concentrate on this vignette’s rich meditation on love and the suffering we endure for it.

If you’re looking for a fabulous date-night this Spring, go see “Metamorphoses.” For an inexpensive meal option, pre-order a three-course prix fixe meal from the Catwalk Cafe for $19 per person. We recommend sharing the Boston Cream pie and saving the cookie for after the play (there’s no intermission).

Honesty Clause: I received two complimentary tickets to see the production, but but as a career-long entertainment writer, comp tickets never influence my or my husband’s opinion of a production.