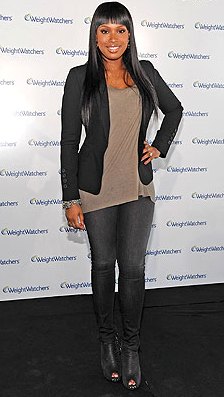 The endless legs, the tiny waist, the chiseled face…and well, of course, the powerful, emotional voice and acting chops, too. No one who has heard her sing on American Idol or act in Dreamgirls can deny that Jennifer Hudson is in possession of enormous talent.

However, it was Hudson’s ability to transform herself from a beautiful, well-proportioned but plus-size bodied woman into a gorgeous, toned, fit creature with a healthier BMI that has enthralled me and so many others.

Not only did Hudson completely transform her body in the public eye, she did so after giving birth to her first child and already losing a good deal of weight before signing on as a Weight Watchers spokesperson. In interviews Hudson has stated that before rising to fame on American Idol in 2004, she lost 60 pounds, and also went on to lose the 20 pounds she purposely gained to star in Dreamgirls.

The concept that one’s personal healthiest, most in-shape body can be attained after becoming a mother and after already losing weight is beyond inspiring. My girl crush is so acute that I will publicly admit here that after giving birth to three children with whom I gained, and then lost, the same 30-35 pounds, Jennifer Hudson is a big reason I have joined Weight Watchers this month. Her story shows that there is no reason for us women to rest on our laurels (haunches?). We can always improve our health, and there is no pre-baby limit to future fitness.

I know, I know. Is there anything more cliché than starting a new weight loss program at the beginning of the new year? But I decided that just because it was cliché and seemingly uncool did not mean that it was not a great decision. I know Jennifer would approve.  In her blog for Weight Watchers she writes that she finally learned about balance and correct portion sizes on the program, completely changing the way she eats, thinks about food and views her body.

It is impossible not to love and long for a Jennifer Hudson-like transformation. When I walk into the Weight Watchers storefront in my suburban strip mall and see the posters of her kicking body, I know that my longing is also a possibility.

Maybe it is a crush more on my potential self than on Ms. Hudson per se, but then, it’s my first celebrity crush that may not be unrequited. That makes me love her all the more.

Jessica McFadden writes A Parent in Silver Spring, the go-to website for Washington-area parents looking for fun local activities with their kids. She also launched a blog for parents everywhere, A Parent in America, a lifestyle blog filled with fashion, humor and giveaways.