Pirates of Penzance at Encore Stage and Studio

Pirates of Penzance at Encore Stage and Studio 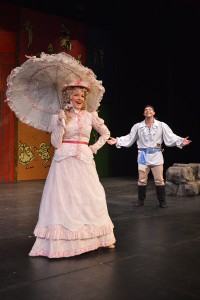 Last Thursday, I raced from my son’s dive meet to see my favorite operetta of all-time, The Pirates of Penzance. The show is playing at Encore Stage and Studio Thursday through Sunday, and features a Helen Hayes award winning cast. The show is playing at Thomas Jefferson Community Center in Arlington. Tickets cost $15 for adults and $10 for children. I’ve seen deals on Goldstar this week for reduced price tickets.

I tapped my foot from the moment the maidens arrived on stage until the show’s end – happily recalling my own tenure in this show, many years ago. The show moves quickly, interrupted by one intermission about two-thirds the way through the show. There’s enough action in the show to entertain even very young audiences.

The cast is anchored by professional actor Erin Driscoll, playing Mabel, who makes performing seem effortless. She fits in perfectly with the other women on stage. I fell in love with Frederick all over again, played by Chris Sizemore. It also made me think of the two babies I know who were born on leap-day this past year. Hopefully, they’ll have an easier fate than Frederick and never be subject to a contract indicating they won’t be released from piracy until their 21st birthday!

This is a fun show, well worth a night out – with, or without, the kids.

Photo credits to Larry McClemons, who generously provided the photos for this post. I was provided free entrance to the show. All opinions are my own. When not reliving her own childhood through theatre excursions, Elaine writes about her own children’s childhood at Connor and Helen Grow Up.