What to Watch This Weekend: Discovery’s ‘Frozen Planet’

What to Watch This Weekend: Discovery’s ‘Frozen Planet’ 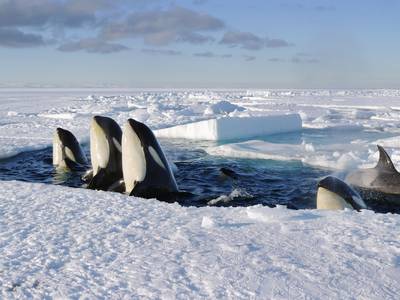 Courtesy: Discovery -- The wolves of the sea!

What to Watch: “Frozen Planet”
When: Premieres at 8 PM on Sunday, March 18
Where: Discovery Channel

Why Should You Tune In: In my family we love nature documentaries. All five of us, even our 4-year-old “baby” is obsessed with them, especially if they involve cool animals, like during Shark Week. Last week, we watched the first two episodes of the  “Frozen Planet” series together, and although the baby closed his eyes during certain parts, every single one of us was in awe of the production.

The series is a co-production between BBC and Discovery, from the same filmmakers responsible for the Planet Earth and Life documentaries. An exploration of life in the polar regions, the series follows all manner of animals that survive in a frozen habitat few of us will ever see in real life.

If your kids are anything like mine, they will delight in sequences like the tense hunt between the pack of killer whales and the seal in the premiere episode. I had no idea that killer whales worked together to hunt. Since they can’t grab prey that’s lounging on ice, the killer whales aka “wolves of the sea” synchronize their movements to create giant waves that tip over their potential meals. Even though the kids were sad to see the seal go under water, it really put up a valiant fight. But yes, the little one did bury his face in my side and ask: “Is it dead?” to which my 10-year-old replied, “yes, but that’s what was supposed to happen, so the whales could eat.”

My 7-year-old daughter particularly loved learning about the penguins. Even though we’ve watched everything from “Happy Feet”  to “March of the Penguins” together, she really took to the story of the “Criminal Penguin,” and since she’s a little mother hen, she also adored the mama polar bear and her cubs in the “Spring” episode. As for me, I can’t wait to see the other five episodes. We’ll be DVRing the Sunday shows for the next month!

Bonus: For kids who can’t get enough of penguins, Discovery.com has a live Penguin Cam where you can check out the Penguin Encounter at SeaWorld San Diego for 24 hours a day all through March and April. It’s not the actual Antarctic, but all five Antarctic species are represented: Adélie, Emperor, Gentoo, King and Macaroni.

I received a screener of the first two episodes courtesy of Discovery, but as a career-long entertainment writer, screeners never influence my opinion of a production.

When she’s not watching cool educational programs on TV, Sandie blogs about Young Adult literature at Teen Lit Rocks and occasionally about herself at Urban Mama. She also reviews movies and books at Common Sense Media.