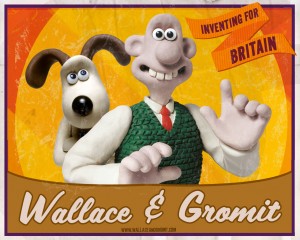 I was lucky enough to be indoctrinated in the world of “Wallace and Gromit” by a former boss over 10 years ago. Having just moved to a small town for a summer job, my coworkers and I relished our Friday movie nights with our boss. We ate popcorn and watched films I’d never heard of, including Aardman Studio’s Wallace and Gromit claymation shorts.

For those not familiar with the comedic man and dog duo, these British characters have adventures many of us only dream about. In “A Grand Day Out,” Wallace builds a spaceship (well Gromit does most of the heavy lifting) in search for cheese from the moon while Gromit fends off a space robot.  No matter what situation they’re in, Wallace is oblivious to their dangerous surroundings. The intelligent, wordless Gromit is always there to save the day. After all, he is man’s best friend.

If you can’t tell by now, I’m totally on Team Gromit. A dog that brews tea, knits, and read Dogstoevsky? I want a furry companion who does all that and he even cleans! Of course Wallace is an optimist and a constant inventor. He loves trying new things. In each film, he’s successfully working a new business, a new career path. His ambition is admirable. 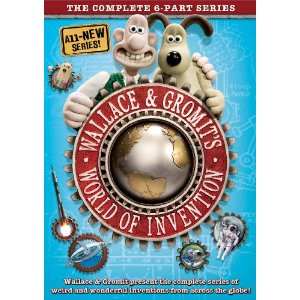 Whether you are for Team Gromit or Team Wallace, you’ll enjoy their latest release, Wallace and Gromit: World of Invention. For the first time ever, Wallace & Gromit will be your hosts  and introduce you to a number of amazing, real-world contraptions. Since the claymation duo are experienced inventors themselves, they’re perfect for their new role as hosts.

Available on DVD and Blu-ray, the new series is now available in stores or at your favorite online shop. For our The DC Moms readers, we have  2 copies to Wallace and Gromit: World of Invention to giveaway. To enter the giveaway, please leave a comment about your favorite animated or claymation production. Maybe it’s another Aardman film, like Chicken Run or a Pixar movie?

Don’t forget to pick up the family friendly Wallace and Gromit: The Complete Collection. Their shorts will become classics in your household: their moon adventure “A Grand Day Out”, the Hitchcock-esque The “Wrong Trousers”, and my favorite “A Close Shave” where poor Gromit is framed for a crime. Of course don’t forget their most recent short, A Matter of Loaf or Death.

Giveaway ends April 4 at 10pm Eastern. Winners will be notified by email and must respond withing 24 hours to claim their prize. The DC Moms is not responsible for lost, delayed or misdirected shipping. No compensation was received to host this giveaway. I will be receiving a copy of Wallace and Gromit: A World of Invention to review. Wallace and Gromit image courtesy of Aardman Productions.

Not usually obsessed with clay dogs, Thien-Kim muses about raising multicultural children at I’m Not the Nanny plus cooking and crafts at Cup of Creativi-Tea.