The 2012 Movie I’m Most Hungering For

The 2012 Movie I’m Most Hungering For 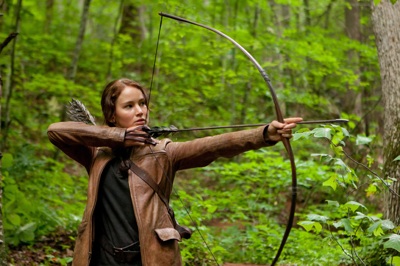 Do you have March 23, 2012 marked on your calendar? That Friday night, the kids will be with a babysitter while my husband and I join up with a group of similarly aged 30 somethings to catch the movie adaptation of the first book of a hugely popular young adult book series.

Sparkly vampires can’t hold a candle to the bad-assness that is Katniss Everdeen.

Still don’t know what I’m talking about? Well then get thee to Amazon immediately and order yourself a copy of Suzanne Collins’ incredible series, The Hunger Games. Almost everyone I know that has read the books has been entranced by the dystopian world Collins created, a world where a government controls all and makes sure its citizens don’t ever forget it. Every year, two young people from each of the twelve districts are sent into the Hunger Games, a fight to the death competition filled with unspeakable horrors that no one can predict. With a combination of Gladiator arena fights of old and reality television of today, the impact of the Games reaches everyone in Panem.

I was highly skeptical that this would be the book for me when my book club chose it back in late 2009. YA fiction? A bunch of violence? Not really my reading style. But then I got the book, and I seriously couldn’t put it down. I had more than one moment when I truly wanted to put the book in the freezer, ala Joey from “Friends,” for my heart was beating so rapidly I thought I was going to come to physical harm. Talk about intensity. I quickly came to adore the protagonist Katniss, for though she is a typical teenager in some ways, her pure heart and devotion to her family are apparent as she faces these terrible Games. Katniss simply cannot afford to lose, or her family will suffer. The way Collins writes, the reader is right there on the ground next to Katniss, seeing every bit of intensity through her eyes.

And now, thanks to the magic of the movies, we get to see Katniss in action when “The Hunger Games” opens on March 23. Though there has been a major level of online discussion among book bloggers and fans about the casting decisions, I think I’m more optimistic about this movie than I usually am about film adaptations of books I’ve loved. Jennifer Lawrence, with darkened hair and a steely toughness about her, portrays Katniss, and from the trailer that I’ve seen, she looks almost as perfect as possible. Liam Hemsworth, a hunky Australian who appears talented in the brooding department, portrays Katniss’s only friend, Gale Hawthorne. To be honest, though, the character I’m most looking forward to seeing on screen is Peeta Mellark, played by Josh Hutcherson, who I loved watching in 2010’s “The Kids Are All Right.” In the books, Peeta was the character I had the most hope for, the one whose intentions always seemed the most pure, and I can’t wait to see if Hutcherson plays him as I imagined him when reading.

Come March, my heart will be racing once again in anticipation of finally getting to see “The Hunger Games“. I imagine there will be a lump in my throat when the first scene opens, and I may be perched on the edge of my seat for the entirety of the film. I’m willing to bet I won’t be the only non-young adult in the audience.

Watch the trailer below!


Dawn loves her books, and she can be really pissy when movies screw them up. She’s got high hopes this time around, and she’ll surely be sharing her opinions after watching the movie, as always, on her blog my thoughts exactly.