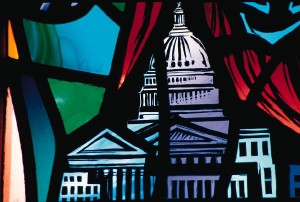 The transition from summer break to the first week of school is often a struggle (albeit met with shouts of HOORAY from some parents) for families throughout the DC area, but throw in aftershocks (did you feel the 3.4 Thursday morning?),and power outages still lingering from Irene, school cancellations in some areas; and attempts to settle into the regular September routine can be a bit more challenging than usual!

Though we maintained power throughout and after Irene, several of my friends in Maryland did not — delaying the start of school for some, and making everyday routines anything but… routine.  According to WTOP News, some schools in Anne Arundel and Prince George’s Counties are closed as of Thursday.  This is one of those times I’m grateful that Fairfax County is stubbornly sticking to the King’s Dominion Law and our schools start after Labor Day — we still have a few more days to try to re-establish sleep patterns and finish getting rooms and closets in order!

My usual trick of slowly putting the kids to bed earlier and making them rise earlier so they will be prepared for the school schedule was completely disrupted by their excitement over the earthquake and then by their desire/fear of Irene.  Who can blame them?  Our storm impact was minimal, but it was still quite windy and rainy outside and JavaBoy found it quite difficult to sleep — staying up until 10:30 pm to see what was going on outside and on TV as he has a particular interest in the weather, and given that I hope this will be a once-in-a-lifetime event for him, I was willing to indulge him.

But I found that I was also not willing to swing into full parental action immediately afterwards — I needed some mommy-recovery time, too — having been a little rattled myself after dealing with attending to everyone’s needs post-earthquake (JavaGirl was quite traumatized, having been in an office building bathroom during the event) and doing all the pre-hurricane prep (those elusive D batteries…), and then putting away all the “just-in-case supplies back in their proper places again.  So as I took a day or two of “let’s just take it easy” days, I was not enforcing “back-to-school” bedtimes and routines either.

Soon, the metro DC area hopes to breathe a sigh of relief and fully back in the swing of things, perhaps just in time for all the 9/11 tenth anniversary memorial activities.

When she’s not coveting order and routine and serving as News and Politics Editor for The DC Moms, J.J. Newby blogs as JavaMom at Caffeine and a Prayer.  Photo credit: Microsoft Office Clip Art Gallery