Harry Potter, How I’ll Miss You

Harry Potter, How I’ll Miss You 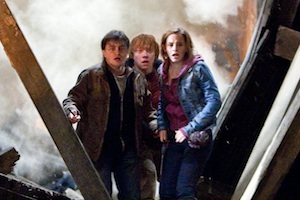 I remember the first time I saw a “Harry Potter” book. I was a senior in college, and my classmate, whose parents are English, had a copy of the U.K. edition of “Harry Potter and the Philosopher’s Stone.” I looked at her and said something like: “How do you have time to read something that’s not on a syllabus — much less a children’s book?” And she said, “It’s soooo good. You’d love it.” In my head, I thought, in what I now realize is my “Hermione voice”: “But I’m a Comp Lit major; I have no time to read extra books.”

Fast forward three-plus years to November, 2001. I’m newly married, newly pregnant (yes, in that order) and newly employed at AOL’s Moviefone. “Harry Potter and the Sorcerer’s Stone” was a huge deal, so naturally our entire staff took a field trip to the press screening together. As an entertainment journalist, I was hooked into the movie franchise from day one, but I still hadn’t read the books. I told myself, “I’ll read them when this baby grows up and wants to read them. We’ll read them together.”

And that’s exactly what happened. The summer after “Harry Potter and the Half-Blood Prince” hit the big screen, my then-7-year-old son and I read the first two books together. And when we finished “Chamber of Secrets” on a memorable trip to Ocracoke Island, I couldn’t stop. I actually rode my bike to Books to be Red twice in as many days to buy the third and fourth books, because I just couldn’t wait to see what happened (even though I knew the major plot developments from the films). I skipped ahead of my son, and a week later, I was done with the entire series and reborn a bonafide Harry Potter fangirl.

So last Friday, as the final “Harry Potter” premiered across the world, I realized that I could trace my entire adulthood — from talking to my friend about the initial book at 21 to weepily walking out of the final film at 34 — through the series. While I regret not being an “original” fan who had to wait anxiously between each of J.K. Rowling’s installments, I’m glad my son and I discovered the magic of the books together.  I’m glad I enjoyed the films before knowing what was left out (so much!) of them. And I’m thrilled the movies ended on such an epic note.

But I’ll miss there being more Potter films to look forward to, more reasons to debate why Ron and Hermione are one of my favorite literary couples, more excuses to see a midnight premiere, even when I’d already seen the preview screening.

So as a screen-to-page lover of the Wizarding World, I’ll just say farewell to the film version of the Boy Who Lived… Now that all is well with his epic saga, I’ll just wait for The Girl on Fire (one of my other young-adult obsessions) to come to life next Spring. March 23rd can’t come soon enough!

Sandie, who can easily go on for hours about her love of Harry Potter and many other Young Adult books, muses about motherhood, marriage and movies at Urban Mama.