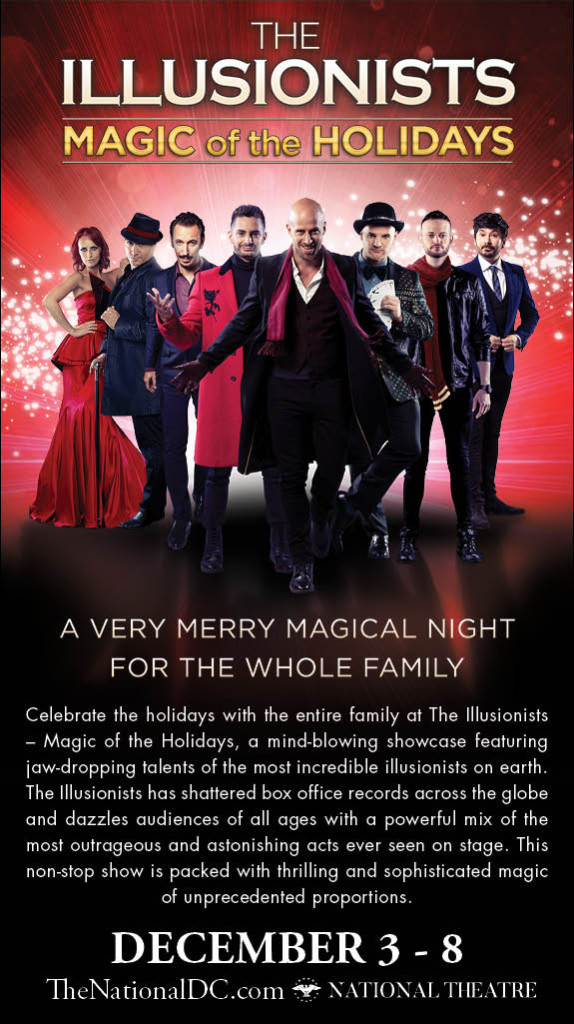 I took two sixth-grade boys to see The Illusionists: Magic of the Holidays, and they were exactly the right target audience for the show. Not that I didn’t enjoy it too — I did. I clapped and laughed and wished we were on the orchestra level, so we could’ve been in contention for the audience participation bits. But there was a particular joy that the boys (and all the kids in the audience) expressed that was contagious.

The kids’ favorite acts were the French illusionist Valentin Azema (The Elusive) whose performance is a bit philosophical and involves “now you see me, now you don’t” reveals; Steve Valentine (The Showman) whose sleight -of-hand card tricks were amazing and who as a dad had some sweet rapport with little kids who helped him on stage; and Florian Sainvet (The Manipulator), who’s silent on stage but does quicksilver manipulation bits that impressed the audience.

Being somewhat typical middle-school boys, the kids also loved Jonathan Goodwin (The Daredevil) who did a stunt involving an amount of risk reminiscent of the old game-show Fear Factor (let’s just say there was a lot of gasping in the audience, but the boys wished Jonathan had more than one spotlight act).

I also thought Steve Valentine was fabulous and also enjoyed the darker comedy of Scottish magician Stuart McCloud’s (The Mentalist) act. It’s easy to see how these illusionists have won awards, Las Vegas residencies, and TV gigs. Sos and Victoria (billed as “The World Best Quick Change Act”) were fun and have a somewhat show-stopping moment the audience will “ooh and aah” over, and British Darren Partridge, aka Dizzy (The Trickster) was a silly and fun MC who hyped the audience with his acts, dancing, and physical comedy.

MORE ABOUT THE SHOW:

Ring in the holidays with the mind-blowing spectacular THE ILLUSIONISTS – MAGIC OF THE HOLIDAYS, showcasing the jaw-dropping talents of the most incredible illusionists on earth. THE ILLUSIONISTS has shattered box office records across the globe and dazzles audiences of all ages with a powerful mix of the most outrageous and astonishing acts ever seen on stage. This nonstop show is packed with thrilling and sophisticated magic of unprecedented proportions.

COMING SOON AT THE NATIONAL: