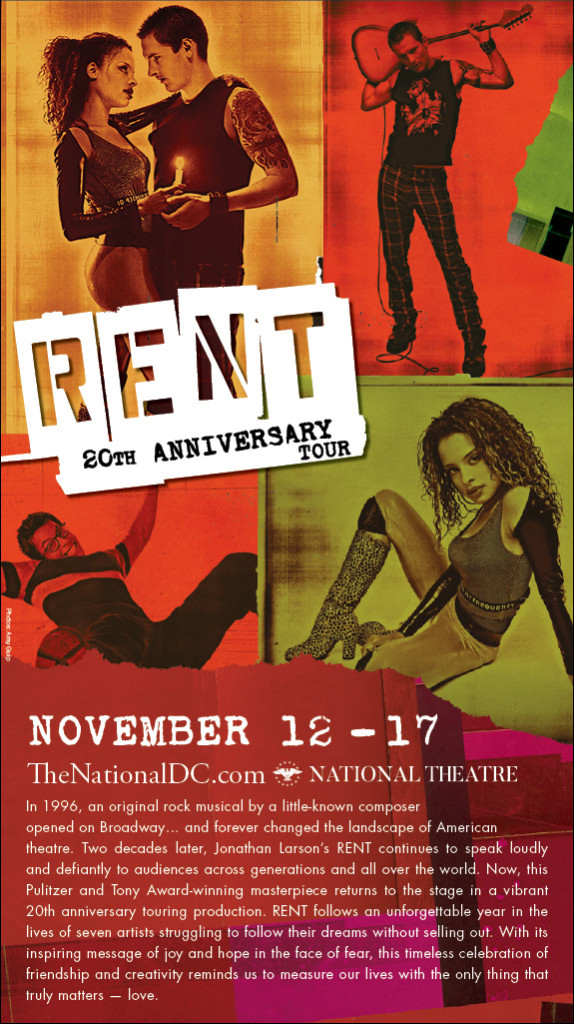 We’re partnering with the National Theatre again to offer our readers tickets to see the 20th anniversary touring production of RENT. One lucky winner will get two tickets to the 7:30PM performance opening night Tuesday, November 12th. Here’s more information about the groundbreaking musical:

In 1996, an original rock musical by a little-known composer opened on Broadway… and forever changed the landscape of American theatre. Two decades later, Jonathan Larson’s RENT continues to speak loudly and defiantly to audiences across generations and all over the world. Now, this Pulitzer and Tony Award-winning masterpiece returns to the stage in a vibrant 20th anniversary touring production. A reimagining of Puccini’s La Bohème, RENT follows an unforgettable year in the lives of seven artists struggling to follow their dreams without selling out. With its inspiring message of joy and hope in the face of fear, this timeless celebration of friendship and creativity reminds us to measure our lives with the only thing that truly matters — love.

Watch a trailer for the show:

To enter the giveaway, simply comment here or on our Facebook page by 9:00AM ET Monday, Nov. 11, 2019. Answer the following question: What Broadway show do you wish would come to D.C.? I will randomly select a winner on Monday, Nov. 11th.