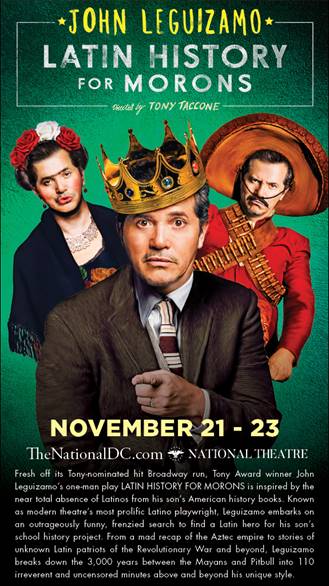 It’s theater season! We’re once again partnering with the National Theatre to offer one lucky reader two tickets to see one of my favorite comedians John Leguizamo’s new one-man show: LATIN HISTORY FOR MORONS. One lucky winner will get two tickets to the 7:30PM performance opening night this Thursday, November 21st. Here’s more information about the groundbreaking musical:

Fresh off its Tony-nominated hit Broadway run, Tony Award winner John Leguizamo’s one-man play LATIN HISTORY FOR MORONS is inspired by the near total absence of Latinos from his son’s American history books. Known as modern theatre’s most prolific Latino playwright, Leguizamo embarks on an outrageously funny, frenzied search to find a Latin hero for his son’s school history project. From a mad recap of the Aztec empire to stories of unknown Latin patriots of the Revolutionary War and beyond, Leguizamo breaks down the 3,000 years between the Mayans and Pitbull into 110 irreverent and uncensored minutes above and beyond his unique style. Don’t miss the show The New York Times calls “a surprisingly poignant one-man play that slyly poses sharp and timely questions of what culturally defines American identity and who, in the nationalistic age of Trump, has ‘the right’ to be here.”

To enter the giveaway, simply comment here or on our Facebook page by 9:00AM ET Tuesday Nov. 19th, 2019. Answer the following question: What comedian’s show do you wish would come to D.C.? I will randomly select a winner Tuesday, Nov. 19th.