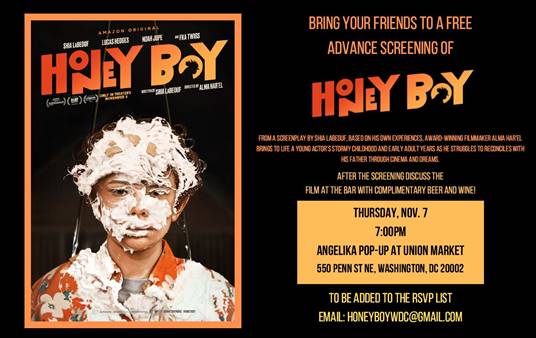 Our friends at Allied, on behalf of Amazon Studios, are hosting a free advance screening of the much-anticipated indie drama HONEY BOY  on Thursday, November 7th at the Angelika Pop-Up Theatre in Union Market. We have 20 passes (each allows two guests) to give away. Please arrive early, as there are often more folks with passes than actual seats. Click here for the admit-two passes: https://amazonscreenings.com/index.php/main/movie_landing/eGJHd1cwMjU3Ng%3D%3D

From a screenplay by Shia LaBeouf, based on his own experiences, award-winning filmmaker Alma Har’el brings to life a young actor’s stormy childhood and early adult years as he struggles to reconcile with his father through cinema and dreams. Fictionalizing his childhood ascent to stardom, and subsequent adult crash-landing into rehab and recovery, Har’el casts Noah Jupe and Lucas Hedges as Otis Lort, navigating different stages in a frenetic career. LaBeouf takes on the daring and therapeutic challenge of playing a version of his own father, an ex-rodeo clown and a felon. Artist and musician FKA twigs makes her feature acting debut, playing neighbor and kindred spirit to the younger Otis in their garden-court motel home. Har’el’s feature narrative debut is a one-of-a- kind collaboration between filmmaker and subject, exploring art as therapy and imagination as hope.