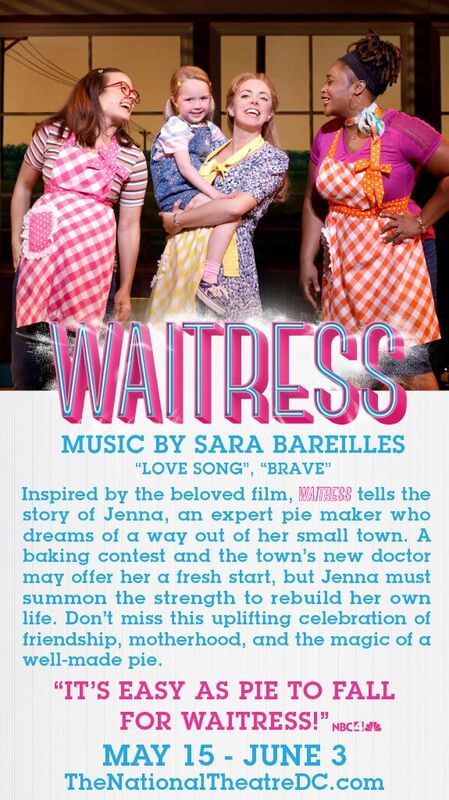 We are thrilled to offer one of our readers two tickets to see the touring production of a Broadway show: WAITRESS at the National Theatre. One lucky winner will get two tickets the first performance, Tuesday, May 15th at 7:30pm. In case you’re unfamiliar with the musical, here’s more information about the show:

Inspired by Adrienne Shelly’s beloved film, WAITRESS tells the story of Jenna – a waitress and expert pie maker – who dreams of a way out of her small town and loveless marriage. A baking contest in a nearby county and the town’s new doctor may offer her a chance at a fresh start, while her fellow waitresses offer their own recipes for happiness. But Jenna must summon the strength and courage to rebuild her own life.

“THE WOMEN OF WAITRESS ARE CHANGING BROADWAY!” – Time Magazine

“WAITRESS is a little slice of heaven!” says Entertainment Weekly and “a monumental contribution to Broadway!” according to Marie Claire. Don’t miss this uplifting musical celebrating friendship, motherhood, and the magic of a well-made pie.

To enter the giveaway, simply comment here or on our Facebook page by 11:59PM ET May 3rd, 2018. Answer the following question: What Broadway show could you see over and over again? I will randomly select a winner on May 4th.