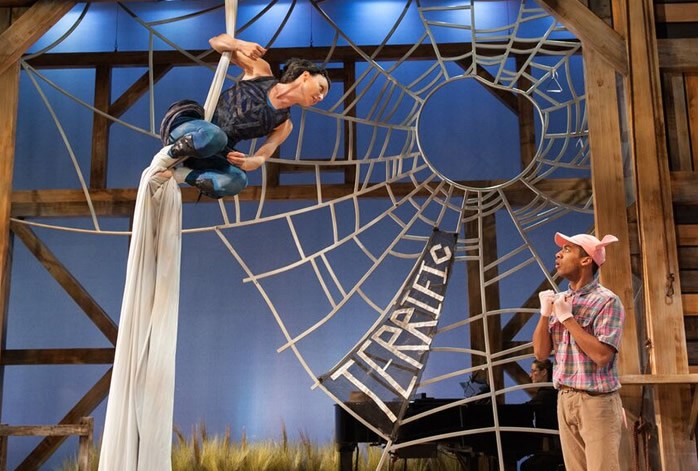 When I read that Imagination Stage had Charlotte’s Web on the docket for their holiday production of 2017, I couldn’t help but smile in anticipation. I had high expectations for the pairing of Imagination Stage’s minimalist and innovative style with the beautifully written, classic tale of Charlotte’s Web by E.B. White, and I wasn’t disappointed. As I expected, it was captivating to watch the farmyard characters come to life on stage each with its distinctive personality and quotes straight from the book. I was also totally delighted by the musical accompaniment that was created by this small ensemble of actors.

My 8-year-old daughter lit up watching each of the actors enter the stage with a musical instrument in hand; small children around us proudly identified the flute and the violin to their attentive parents and then inquired about the banjo and ukulele. Having just begun piano lessons this past year, my daughter was mesmerized by the skill of the pianist, Deborah Jacobson, who masterfully arranged familiar folk tunes and classic melodies together to paint a charming picture of life on an American farm and at a county fair. 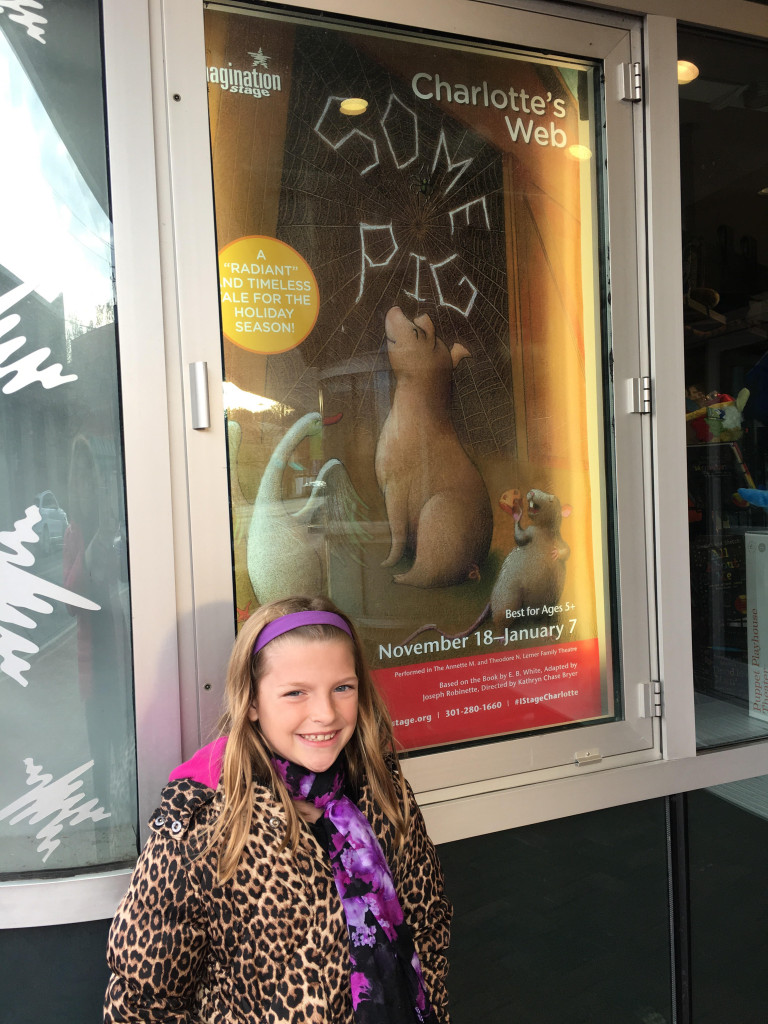 The author’s daughter at Imagination Stage

For my daughter, only the theatrical and aerial performances of Charlotte (Shanara Gabrielle) eclipsed the musical performance of the pianist. Charlotte truly stands out as the heart of the production. She teaches children emotional lessons about empathy and friendship through her devotion to Wilbur the pig. Yet, it’s Charlotte’s enchanting flute melodies and aerial silk tricks that keep the young audience’s eyes glued to the stage unwilling to miss a second of her performance.

While my 7-year-old son did not attend the performance with my daughter and me, I know that his favorite character would have been the self-absorbed but witty Templeton rat (Jonathan Feuer.) Templeton’s comedic laziness would have resonated with my little boy and certainly brought a grin to his face.

The younger crowd at the show was drawn to the cheerful, charismatic Wilbur (Timotheus German). His entertaining snorts and youthful energy were the very picture of Wilbur that I’ve gotten every time I’ve picked up a copy of Charlotte’s Web or heard the book read aloud.

Imagination Station’s adaptation of Charlotte’s Web, really is “some show” — it’s radiant and joyful; energetic and terrific. It’s the perfect show for the family to enjoy together this holiday season.

Watch a clip from the show:

Know Before You Go:
–The production runs at least 90 minutes, with the first act running approximately 45 minutes before allowing for a quick intermission.  Children should be able to sit for the entire performance so about 45 minutes plus an additional 30 minutes after only a brief intermission.

–The recommended age for this production of Charlotte’s Web is ages five and up. There were several children younger than five in the audience during the performance that we attended including a few disruptive young toddlers that threw fits. Most four year olds I saw did OK throughout the performance but were getting quite fidgety towards the end.

—Spoiler Alert: Yes, Charlotte dies. None of the children seated around us seemed to have a problem with this fact of life. If you’re concerned that your child might become emotional or have difficulty with the death of Charlotte the spider, I recommend reading the book beforehand.

–Honestly, everyone should read the book before watching this performance or listen to a recording. The recording that our family has from Audible is only 3-4 hours long. There are several quotes from the book in this adaptation by Joseph Robinette, but overall, the eloquent language and rhythm of EB White’s classic is not fully captured in this adaptation.  The performance is lovely, but it is simply not the same as reading this true classic in children’s literature.

–Elementary school age children are the target audience for this adaptation. My eight year old third grader loved it! There were plenty of older elementary age children in the audience, ages 9 – 12, who looked to be enjoying the show. The show really does appeal to all ages.