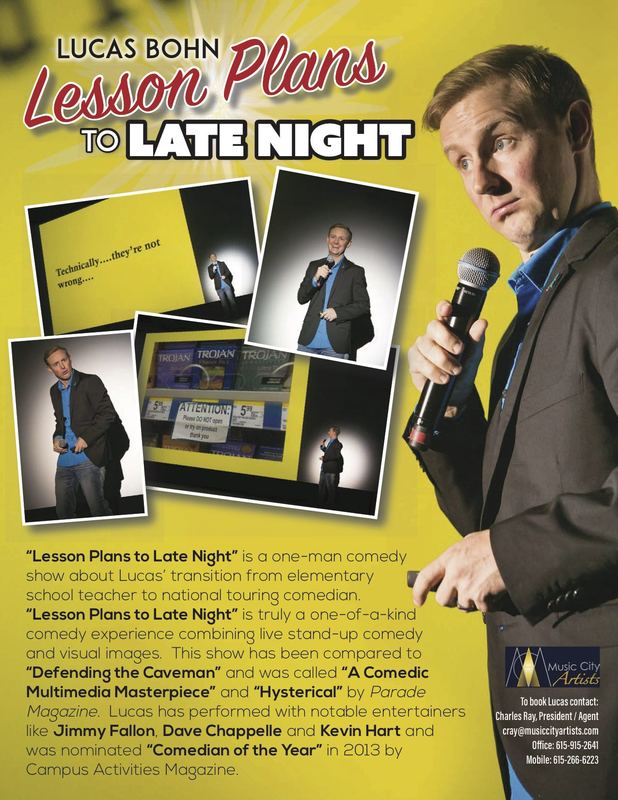 This is a year a lot of us could use more comedy living in the D.C. area. If you agree, we have just the thing to make your week: 10 pairs of tickets to see up-and-coming comic Lucas Bohn’s one-man show “Lesson Plans to Late Night” at 7PM this Thursday night at Drafthouse Comedy. The venue is located at 1100 13th St NW, Washington, DC 20005.

“Lesson Plans to Late Night” tells the hilarious story of Bohn’s  journey from elementary-school teacher to stand-up comic. It combines live stand up comedy and visual images. The show has been compared to “Defending the Caveman” and was called “a comedic multimedia masterpiece” and “hysterical” by Parade magazine. If you’ve ever worked with or have children or grandkids, you don’t want to miss Bohn’s show.

Here’s a clip from the show:

Where is the show? Drafthouse Comedy at 7PM this Thursday May 4th. Please note, this is a 21 & up venue.


More about Lucas Bohn: Lucas Bohn is energetic with an edge. The perfect blend of schoolboy charm and bad-boy charisma, his comedy is both smart and audacious. Known as the little guy who generates big laughs, Lucas has shared the stage with Dave Chappelle, Jimmy Fallon, and Kevin Hart. Lucas’ high-energy shows and hilarious impersonations make him an instant hit with audiences of all ages. In 2013 Lucas was nominated “Comedian of the Year” by Campus Activities Magazine. Lucas placed runner-up in the Magners Comedy Festival and was awarded Best of the Fest at the Detroit Comedy Festival. In addition to performing on stage, Lucas does voice-overs and has been featured on PBS, CBS, and Coastal Today. Follow Lucas on Twitter or Facebook.

To win a pair of tickets, just leave a comment saying why you could use a night of comedy.