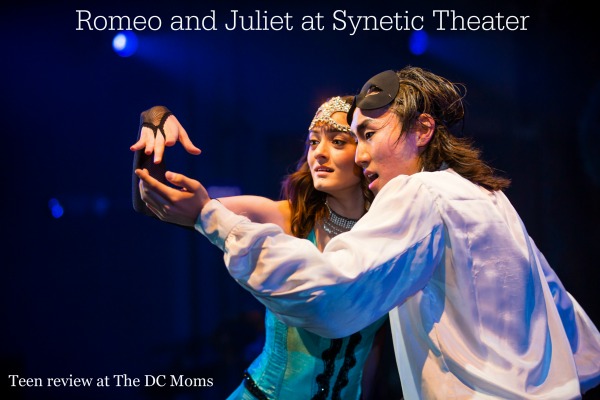 I’m happy to share another theater review from our resident teen critic, Lexie, a ninth grader at a Montgomery County high school. Below is her review of Romeo and Juliet at the Synetic Theater.

Romeo and Juliet is a tragic story of two star-crossed lovers. The two teenagers are desperately in love with each other, but their parents hate one another. They get married behind their parents’ backs. Romeo is banished from the town, and Juliet is forced to marry another. Upset about the loss of her true love, Juliet fakes her death. Romeo finds out and thinks she is really dead and kills himself. Juliet wakes up, finds Romeo dead beside her, and kills herself as well. All this is communicated to the audience without uttering a word.

The setting of the play is the gears of a clock. The director, Paata Tsikurishvili, set the play there in order to show that the fated lovers are trying to outrun time from the very beginning. The set is interactive and original.

The lights were dim and dark throughout the show, creating a dramatic, eerie mood. The love scene between Romeo and Juliet had them behind an outstretched sheet, with a backlight shining on them so only their silhouettes can be seen. The lighting designer, Brittany Diliberto, does a great job capturing the inevitability of doom through lights. The sound is also important. The music in the background contained a series of clicking noises like a clock as time ticks away. 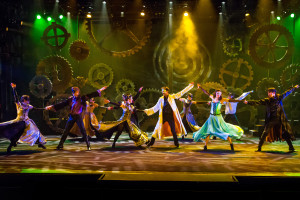 The costumes are dark and mysterious in this play. It creates a sense of dread and fear amongst the characters and the audience. Anastazia Whittle does an outstanding job creating mood through costumes.

The actors are phenomenal. They rely totally on expression, body language, music, mood and dance. They all have great physicality and elaborate movement. This type of theater is very physically demanding and the actors handled it well. At one point Mercutio (Phillip Fletcher) does numerous rolls without stopping. When a character dies, the actor uses a technique called shadow-walking to exit the stage. The actors look great on stage and capture the essence of the play beautifully. Overall, the play is exciting and dramatic, and even for those who are familiar with the plot, it kept one on their toes. This play comes together to create a theatrical masterpiece.

Watch a trailer of the play: