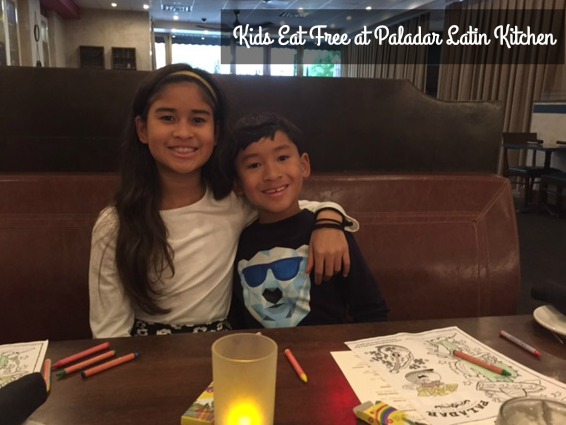 We get pitched daily with requests to promote local restaurants, stores, and events, and unfortunately we just can’t get to all of them. But one that spoke to me immediately was a chance to try Paladar Latin Kitchen & Rum Bar. As a Latina who has lived only in two other huge cities — New York and Miami — I jump at the chance to have fusion Latin fare. My family was treated to a complimentary meal (minus gratuity, which we gladly paid) at the Paladar in North Bethesda off of Rockville Pike (it’s right across the street from the Whole Foods). It’s a mini-chain, so there are locations throughout the DC area, including Gaithersburg, Tysons and Annapolis.

I wasn’t sure what to expect, but I was blown away by the service and the options, and not just for adults. The kids’ menu includes cheese quesadillas and chicken, but it also features mini Cuban sandwiches (what I would’ve ordered!), and my kid’s choice, tilapia with rice pilaf and green beans. My 10-year-old daughter is a vegetarian, but she will eat fish occasionally, and she made the exception for the tilapia and loved it. She gets bored of quesadillas, since we add them in her lunch fairly often, My 7-year-old son, who is our picky eater, devoured the popcorn chicken and fries and asked if he could have seconds (um, no).

As for the grown-up menu, we highly recommend the made-to-order guacamole, the Latin comfort food, the grilled meat and seafood, and basically anything steak or pork related (if like us, you still eat meat!). If you have room for dessert, we had the donuts, and I had a café con leche that transported me like Proust’s madeleine to growing up in Miami. It was the perfect mix of milk and coffee, and I will definitely return for another Latin-inspired meal.

Then there are the drinks. My husband doesn’t drink, and I’m pretty cocktail illiterate. I like them, but I don’t make them at home and only have them once every couple of months when we’re on a date or I’m having a moms’ night out. But I *do* like sangria and mojitos, and Paladar had options of both, including a seasonal pumpkin spice mojito that might sound a bit much (do we really need something else that’s pumpkin spiced?), but it was fantastic, as was the tropical mango white sangria (I needed something a bit lighter than the traditional sangria after the mojito). If you like rum, the bartenders at Paladar have a somewhat encyclopedic knowledge on the liquor.

Through November 1, kids 12 and under eat free from 4 p.m. – close Monday – Thursday at all Paladar Latin Kitchen & Rum Bar locations. Parents can enjoy Paladar’s Latin inspired cuisine and cocktails (and over 50 rum offerings) with the family, while kids can choose from quesadillas, popcorn chicken and mini Cuban sandwiches (full menu here). Kids Eat Free applies to dine-in only and valid with the purchase of a single menu item priced $13.95 or higher.