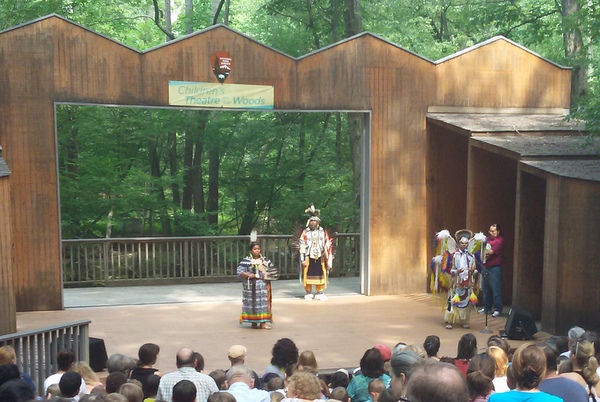 Seeing the Native Pride Dancers perform at Wolf Trap’s Children’s Theatre-in-the-Woods was a delightful way to inaugurate the first post-camp week of summer break. The Theatre-in-the-Woods truly is a gem I was glad to get back to this year. At nine years old, my son fondly remembers seeing Steve Songs when I was pregnant with his little sister and again when she was nearly a year old as well as the time we saw Elizabeth Mitchell when she was two. Now that she’s four, nearing five, I’m thrilled that we made it so it can be part of her memories, too. It was a bonus to go on a gorgeous June morning that was perfect for post-performance picnic and creek play.

The Native Pride Dancers were there not just to entertain but to inform. I was impressed with the way Native Pride Arts founder Larry Yazzie described native traditions and helped dispel misconceptions about native peoples. He explained that the native dress he was wearing was not a costume: “You might dress up on Halloween, but this is not fantasy. This is who we are.” 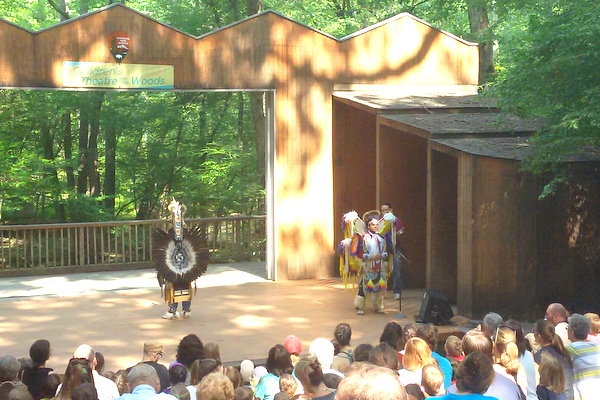 Before and between the dances, audience members learned the significance of the shape of moccasins (they tell where the wearer is from) as well as the number and placement of beads and feathers. It might take two years to bead one traditional dress by hand.

The meaning of each dance and its particular movements was explained. The dances show respect and honor the dancers’ ancestors; they are not just jumping around! There was a dance for healing, a warrior dance, a “fancy dance” from the 1920s, and a snake dance representing change, which children were invited to participate in. 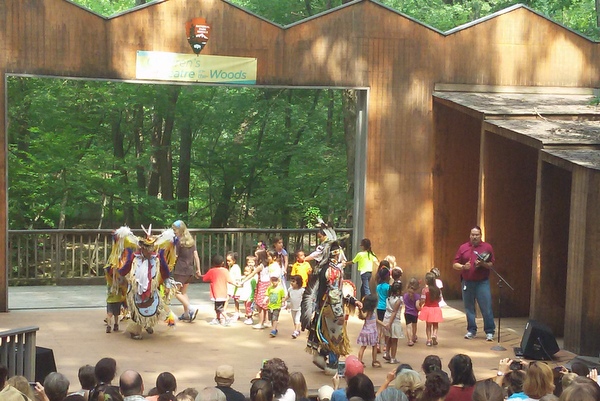 Attendees were encouraged to attend pow wows to learn more about native peoples and understand the meaning behind dances and customs. Among the tribes in Virginia and Maryland are the Piscataway. The 17th Annual Cheroenhaka (Nottoway) Pow Wow takes place this weekend, July 24-25 in Courtland, Virginia. Check out upcoming Maryland Pow Wows, Virginia Pow Wows and Pow Wows anywhere in the U.S.

If you go to Wolf Trap this summer:

The Children’s Theatre-in-the-Woods season continues for the next few weeks with a variety of dance and musical acts culminating with the Saturday, August 8 performance by Dan Zanes.

Unlike years ago when you had to park down in the lot and walk up the grass hill, parking is allowed now on the grass hill. But still, budget in time to walk all the way down the long hill, especially if there are little legs coming along. 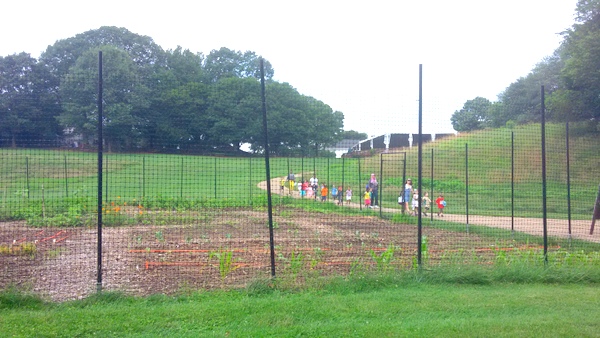 Restrooms are by the cars at the top of the hill or, at the bottom of the hill, across the meadow (or through the woods) from the ticket kiosk.

You won’t need much sunscreen under the canopy in the amphitheatre, but do consider insect repellant before you cross the bridge into the woods, especially if it’s been rainy. We didn’t go home with any bites, but that may be thanks to our essential oils! And check for ticks, just like after any time in any woods. 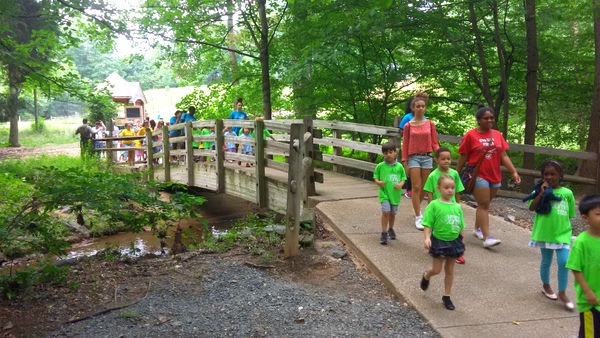 The picnic area had a little more sun than the performance area but was still pretty shady. Pack a lunch – and lots of water – and make a day of it! Bring it all with you to the performance. You will not want to walk up the hill back to the car and then down again to the picnic area. 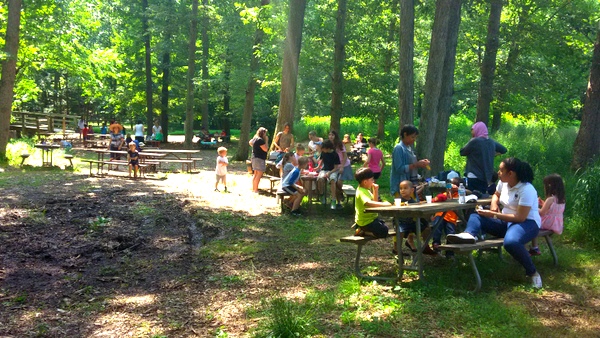 Bring creek shoes, towels and possibly a change of clothing. 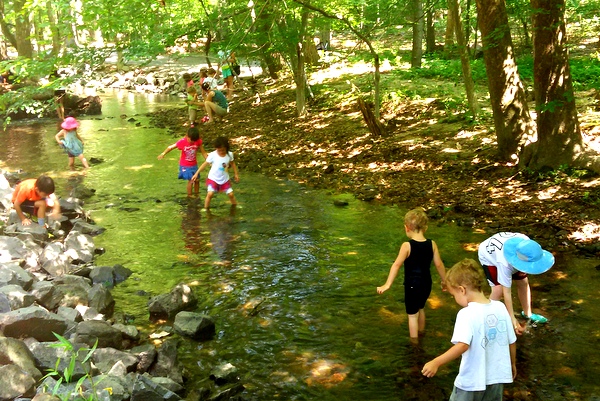 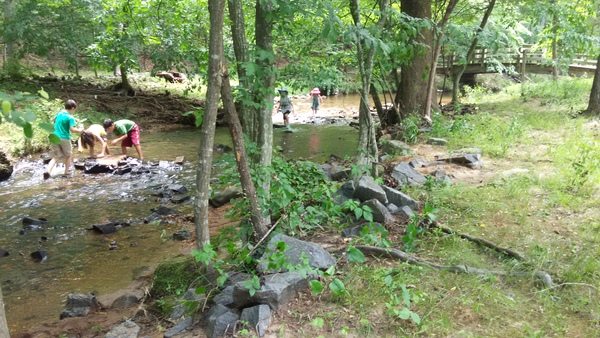 Avoid playing in creeks soon after rain when they contain higher levels of bacteria.  Be sure to wash hands well before you head home.

Leave a little time to let your kids pretend perform in the amphitheatre that is out by the kiosk, before the bridge into the woods. 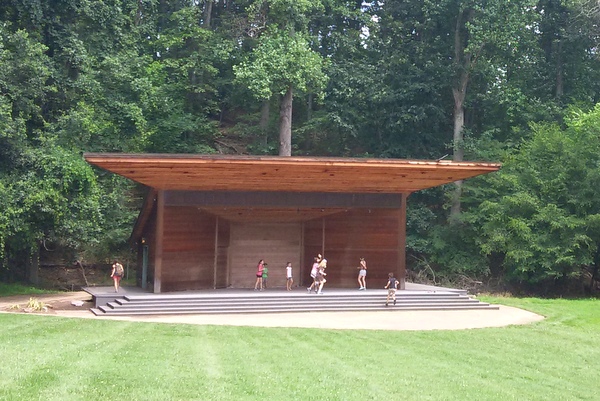 And be sure to check out the 60’x80′ garden by the ticket kiosk. All of the food that is grown in this and the other Wolf Trap gardens is used for special events and pre-performance dinners with surplus food being donated to local food pantries. 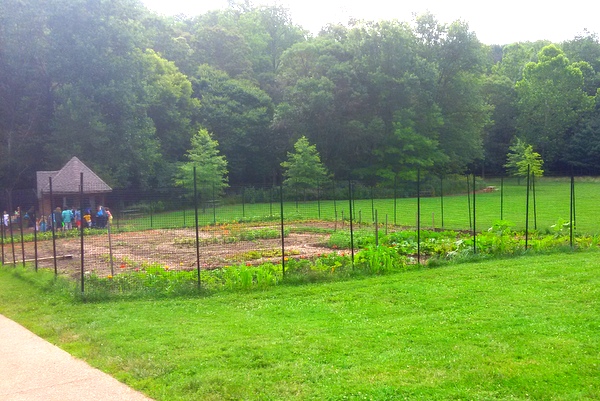 In asking about the garden, I also learned that the National Park Service has a beekeeping operation that Wolf Trap Executive chef Chris Faessen was inspired to start after visiting the White House and seeing its bees. The idea seemed well in keeping with Wolf Trap’s Green Initiative and Sustainability Initiative.

Disclosure: I was offered three tickets to this performance. All opinions are my own.

Jessica Claire Haney writes about natural family living in Metro DC at Mindful Healthy Life, where she hopes someday to write in more detail about Wolf Trap’s beekeeping operation and other sustainability efforts. Her personal blog is Crunchy-Chewy Mama.