Mockingbird Addresses Grieving as a Community and Asperger’s

Mockingbird Addresses Grieving as a Community and Asperger’s 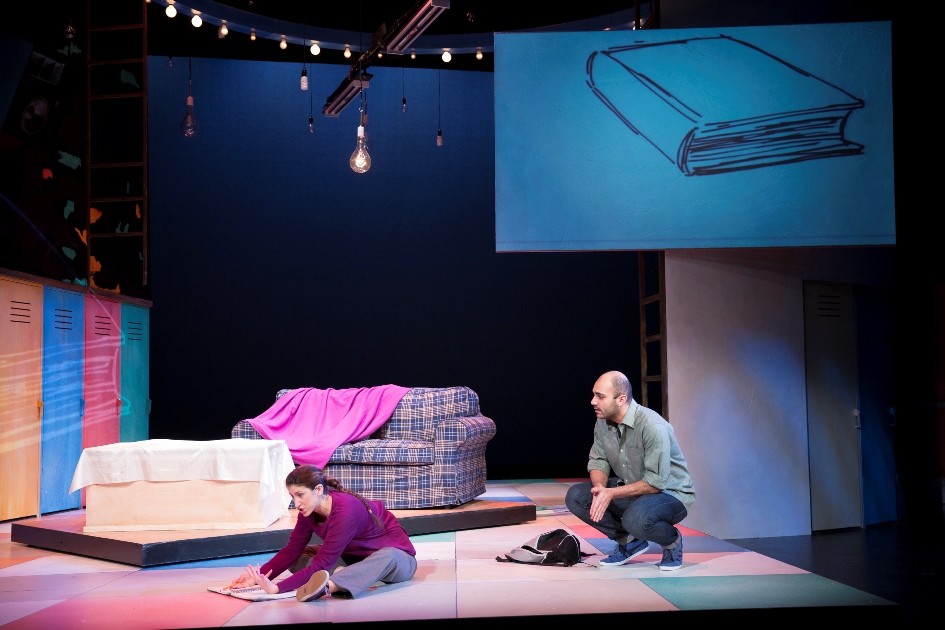 Fifth grade is a pivotal point in time in childhood. One foot in elementary school and (in some counties) the other foot headed out the door to middle school. Add to the that the grief of having an older brother who was the innocent victim of a school shooting and the confusing complexities of having Asperger’s in a world geared toward those without it, and you have an inkling about what Caitlin, the main character of National-Book Award-winning novel and subsequent adapted play, Mockingbird, is going through. You can see the world premiere production of Mockingbird now through February 1 in the Family Theater at the Kennedy Center in DC.

Like most Virginia residents, author Kathryn Erskine felt deeply impacted by the 2007 Virginia Tech shootings even though she didn’t personally know the victims. This drove her to explore how communities and families dealt with the aftermath of such events; particularly families with special-needs children as she has a daughter with Asperger’s syndrome. This exploration was the impetus of her young-adult novel, Mockingbird.

My daughter and I attended the media preview of Mockingbird at the Kennedy Center, January 17. A wonderful thing the Family Theater provides is the Cuesheet performance guide, which helps young audience members learnabout th e specific play they are about to see and picks out elements to watch for such as how the lighting will change to depict different moods in specific scenes. I recommend either coming a little bit early to take time to go over the eight-page guide with your kids or read it ahead of time online.

The play is centered around 11-year-old Caitlin who alternates between being narrator as well as part of the action. Although there is not a specific reference to her Asperger’s in the play, she makes many references to being “different” and needing coaching and there are times when the other children call her weird. Caitlin very much misses her brother, Devon, because he was the one who told her things like “not to moan and rock in public.” Caitlin’s main point of reference for “acting normal” now is her school counselor, Mrs. Brook, and the posters she refers to such as the Your Manners and the Facial Expressions charts. While Caitlin struggles with missing Devon’s guidance and navigating the difficult waters of fifth grade mostly on her own, those around her are struggling with the effects of the middle school shooting and what they perceive as Caitlin’s inability to process the reality of Devon’s death and their own grief.

Though I do not have a family member with Asperger’s, I have several friends who do. I cannot pretend to grasp the full complexities of living with Asperger’s, but I would say that the play captures many of the elements of the struggles that can happen between “Aspies” and “neurotypicals.” Seeing life through Caitlin’s eyes while simultaneously understanding what the autho are trying to communicate was very enlightening. And heartbreaking. For instance, when she was trying to “teach” the playground bully not to invade people’s personal space, she got in trouble because it looked like she was fighting with him — when she was instead trying to help. How often do these types of misunderstandings occur in real life?

If you are attending the play with someone with sensory sensitivities, there are  sensory-friendly performances Saturday. January 24 at 1:30 pm and Saturday, January 31 at 11 am. Because the plot involves highlighting how noise and light impacts Caitlin, there are times when those may affect people who are more sensitive.

Another note, be aware that there are times when Devon’s gaping chest wound from being shot in the heart is mentioned in detail.

The stage has to represent Caitlin’s home, classroom, school playground, and Miss Brook’s office and does so through very clever set design and effective lighting. Caitlin’s drawings are a key plot point and we are able to see them as well as other elements via a subtly incorporated video screen. However, be forewarned that if your children are as inquisitive as my daughter, you may get endless questions from the moment you sit down about the gigantic photographic print of Caitlin’s hand hanging from the ceiling of the stage. Additionally, my daughter’s one criticism of the play was that since Devon was so critical to the play, she wished they had shown a photo of him (a photo is mentioned, but not actually displayed). Interesting point, perhaps it was a creative decision to keep us from focusing on the fictional face of the deceased. He is instead represented by his unfinished Eagle Scout project, a wooden chest.

The cast features all adults, so 11-year-old Caitlin is played by Dylan Silver. Three key adults in her life are Dad (Maboud Ebrahimzadeh), her school counselor (Gabriela Fernandez-Coffey), and her teacher Mrs. Johnson (Susan Lynskey). What may confuse younger audience members is that all the other roles in the play, including Caitlin’s classmates, are played by the same cast members in multiple costume changes (Aaron Bliden, Rex Daugherty, Thony Mena, Tia Shearer, Kathryn Tkel). Sometimes they are first graders, sometimes they are fifth graders, sometimes they are grown-up relatives after the funeral — it may be helpful to explain this to younger audience members who aren’t familiar with this theater convention.

Julie Jensen adapted Mockingbird for the stage, and while it is fairly true to the book, some details are changed and some are left out. The heart of the story is there, however and much of it is word-for-word from the book. I read the book after the play as I didn’t want the book to color my opinion of the play. I have a mixed opinion as to whether I would advise you to read the book first or not and in the end I would say it comes down to personal preference — one will definitely influence how you process the other.

My daughter and I enjoyed this play thoroughly and had a chance to meet the author and purchase an autographed copy of the book. It is emotionally intense and it will have to be a parenting decision whether it is appropriate for your child, but it brought up some great discussion points for my daughter and I. The recommended age for attendees is 10 and up. At the media preview, there were few children, so don’t feel like you have to bring kids to the play either!

Mockingbird, directed by Tracy Callahan, is presented by the Kennedy Center and VSA, the international organization on arts and disability. Tickets are $20, check this site for dates and availability.

Disclaimer: My daughter and I were provided with complimentary tickets as member of the press for the media preview. This did not impact the opinions I expressed here.

J.J. Newby is mother of two busy kids and therefore gets through life on Caffeine and a Prayer each day, which is also the name of her blog, where she writes about whatever she feels like whenever she has a spare moment!