Encore Stage & Studio productions are regularly on our family calendar, but Cinderella was the first show I’d gone to with just my younger daughter, who is almost four and a half. It was a chance to see the fairy tale through new eyes: I don’t think she knew anything about Cinderella or Snow White until recently when she checked out of the school library Dear Cinderella, an epistolary children’s book composed of letters between both fairy tale maidens. It’s a cute book, but it loses something if you don’t know either story!

Enter Encore’s Cinderella, which runs through this weekend. Since we don’t do a lot of screen time at home, what better way for my daughter to get to know this classic? She and her brother enjoyed two weeks of Encore’s summer camp this past August, so seeing some of the staff at the show helps make the connection about performance and the fun she had there. 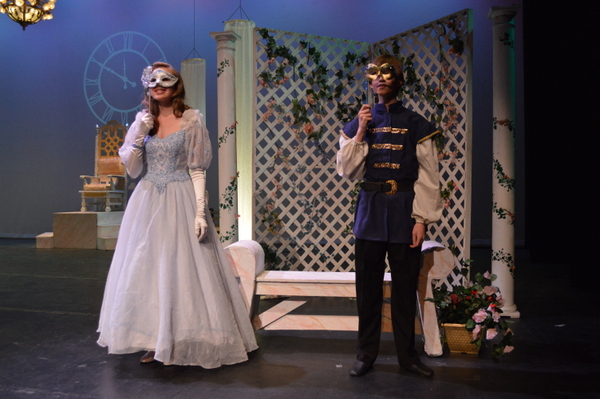 The packed auditorium at last Sunday’s performance tells me there is plenty of affection for this story and for Encore, theatre “by kids, for kids.” The crowd, filled with Girl Scout troops and with the friends of two children whose birthdays were announced at the beginning of the sold-out show, was enthusiastic about the flickering of lights at the beginning of the show, the ensemble number at the end, and everything in between.

I’d gotten some of the last available tickets for this performance, so my seats were fairly high up. As such, the sound felt a little harder to follow than other shows. Cinderella is a musical but has plenty of talking that might be a challenge for children much under five. (The show is recommended for age 4 and older). My daughter kept up gamely, even though she didn’t much know the storyline. She even sat in her own seat – and on the edge of it! – the whole time. Not normally the most patient of children, it’s no small feat that the performance held her attention. 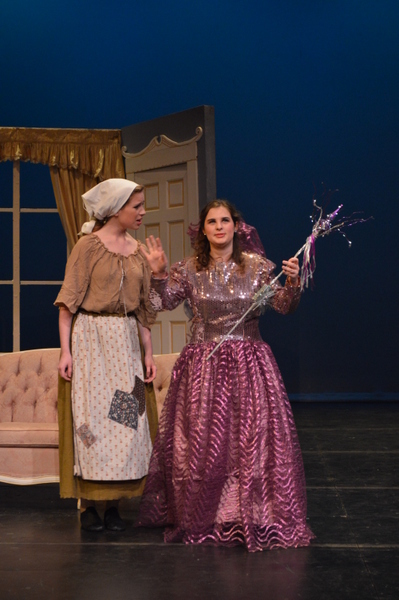 What I love about Encore is that kids get to see kids perform. My older son has thoroughly enjoyed some of the more mature shows. Now that he’s nearing the age when he could consider auditioning, I’m grateful that he’s had such wonderful role models. They are all great, but they are also human. It’s a hoot to see these kids in different roles in different shows and then to meet them after the performance when they sign programs in the lobby. I’m so pleased to have this institution available to us.

The pacing of Cinderella was not like lightning, and the running time was closer to two hours than the 90 minutes (including intermission) we’d been told. The theatre at Thomas Jefferson Middle School has only a few restrooms, and with a sold-out crowd flooding into the lobby before the show and during intermission, I imagine it’s hard to both accommodate so many little bladders and also keep to a timeline. So a young squirmy worm might have a little trouble getting through the performance, but the two-and-a-half-year-old little boy next to us made it through the whole thing.

For a child like mine with little background knowledge, some explanation about the story might serve well to help follow along. My son would have asked a million questions about what was going on if I’d taken him to this show at age four, but my less-probing daughter just took it all in with nary a one. When I asked how she liked the show, she said “great,” and when asked to describe Cinderella, my daughter announced “nice” because she gave treats to the animals (in the first scene). 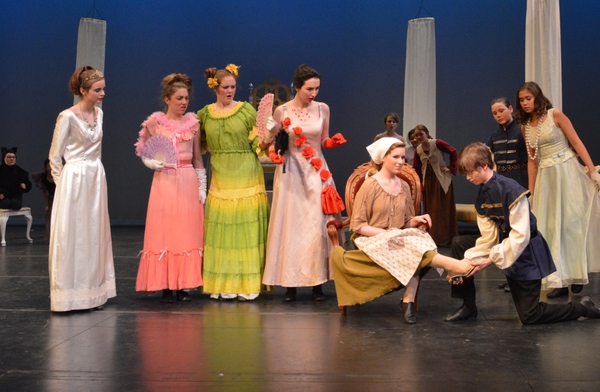 As for performances, everyone on stage seemed to be enjoying themselves. The step-sisters provided some great comic relief; I predict a career in stand-up for Marshall High School junior Ana McMenamin, who played Cleopatra. The songs were all sung ably enough if not to the most catchy or lively score. By contrast, it was hard to walk away from The Little Mermaid without tapping your toes. The music in that show (which we loved at Encore last season) lends itself to looser and more jovial choreography than did the score of Cinderella. Cinderella was quieter and more subdued.

And yet, with so much bling in our kids’ lives these days, I welcome something that simply tells its story, and I enjoyed seeing the classic come to life on the Encore stage.

Cinderella runs through this coming weekend with the following performances:

The 3:00 performance on Saturday will provide accommodations for children with special needs, including ASL interpretation and assisted listening devices and Braille and large print programs. Patrons interested in a backstage tour may email info (at) encorestage (dot) org in advance to make arrangements.

Disclosure: I was provided with two tickets in exchange for writing this review. All opinions are my own.