Review: Fiddler on the Roof at Arena Stage

Review: Fiddler on the Roof at Arena Stage 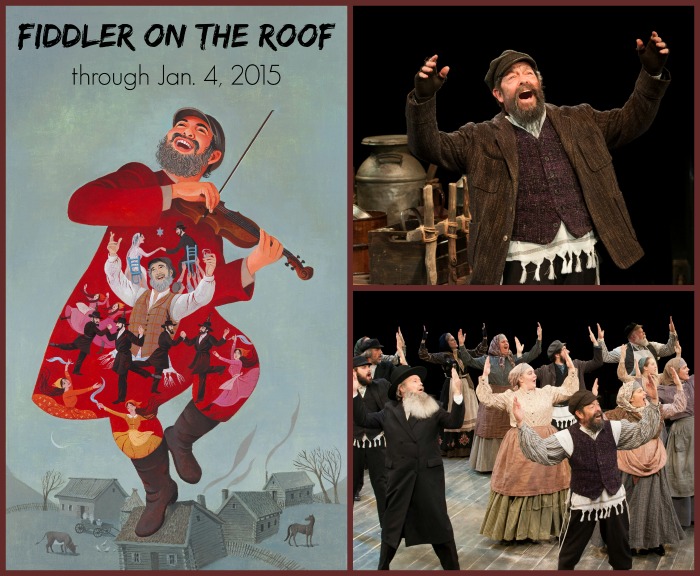 A week ago today, two important milestones occurred in my family: my daughter turned 10, and she accompanied me to see the new 50th anniversary production of FIDDLER ON THE ROOF at Arena Stage. Normally, my husband, a fellow theater lover, accompanies me to opening night performances, but since it was our daughter’s birthday, we agreed she should have the opportunity to experience one of our favorite musicals for the first time.

We started our evening by eating at the Catwalk Café, which serves a themed menu based on current shows. I had the three-course pre-fixe for $25, and my daughter, a vegetarian, ordered a large salad and shared my mushroom soup as an appetizer and a sweet potato pie for dessert (the other Arena Stage show is FIVE GUYS NAMED MOE). I explained most of the show to my daughter, and we discussed questions she had about Jewish culture, matchmaking, and anti-Semitism. She also wanted to know more about my favorite songs and how a show can continue to run again and again decade after decade.

When the show, directed by Arena Stage’s artistic director Molly Smith, finally started, I reached over and held my daughter’s hand. FIDDLER, and the opening number “Tradition” in particular, always reminds me of my mother, who loved the musical and thought it captured the challenges of immigrant life in America. I found myself crying as the cast introduced the audience to the various members of Anatevka. I wished my mother could’ve been there with us, enjoying the show and celebrating her granddaughter.

I was far from the only person who cried — more than once — during the show. FIDDLER ON THE ROOF is an emotional musical. We’re not Jewish, but the themes are universal, and the performers were wonderful. I’ve seen Norman Jewison’s movie adaptation so many times it’s hard not to compare everyone to Topol, Norma Crane, Paul Michael Glaser, etc., but the Arena Stage ensemble was remarkable, committed, and obviously having a ball with the material.

My daughter in particular loved the three daughters and the songs pertaining to their three increasingly scandalous romances (“Matchmaker, Matchmaker”/”Miracle of Miracles”/”Now I Have Everything”/”Far From the Home I Love”). I thought Jonathan Hadary  and Ann Arvia were fabulous as Tevye and Golda, and their hilarious rendition of “The Dream” sequence and “Do You Love Me?” made the entire audience laugh aloud.

During the intermission, my daughter keenly observed that the musical was “really good but also really sad.” After the curtain call, we got in the car and sang song after song, recalling the best lines and our favorite moments, even though it was super late, and way past her bedtime. This is what makes live theater such a joy to experience with our children; I have no doubt she’ll always remember seeing it on her 10th birthday. A week later, my daughter keeps quoting and singing from FIDDLER and has encouraged her friends to see it.

Tickets start at $50 and are available for all dates.

I received two complimentary tickets to see the production, but but as a career-long entertainment writer, comp tickets never influence my or my husband’s opinion of a production.