I wasn’t very well prepared for Father’s Day, but it all turned out OK. I had received an invitation to a “special event” hosted by Spy Gear at the International Spy Museum, and it sounded just about perfect for us. It was only later on, when checking the address, that I discovered that the current special exhibit at the Spy Museum is on James Bond villains. And who here is married to the biggest Bond fan this side of the Atlantic? Why, that would be me. 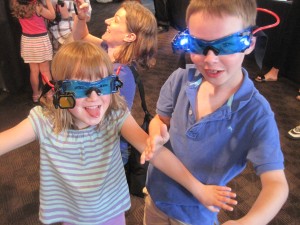 We were greeted with a pair of supercool Spy Gear Night Goggles for everyone.  I don’t have a picture of me wearing mine; you’ll just have to take my word for it.

There were some highly suspicious characters working the room – one with a trenchcoat and a corny Russian accent; the other wearing a hat. Never trust a man in a hat. The kids were able to get caricatures drawn and their handwriting analyzed. (My son was told that he’s very intelligent but needs to spend more time outdoors. I had been skeptical of the analyst’s talents, but when I heard that, I was sold.)

After a brief presentation from Spy Gear’s YouTube sensation, Evan of EvanTubeHD (and his dad), we were given our instructions for the scavenger hunt and let loose in the museum itself. All the other patrons had gone home, and we and the other families at the event had a fabulous time scrambling through tunnels (in our night-vision goggles, of course), examining real spy gear, from buttonhole cameras to spy dog poop (yes really), learning about codes, and – of course, swooning over the gorgeous Bond cars and other memorabilia they have at the moment. 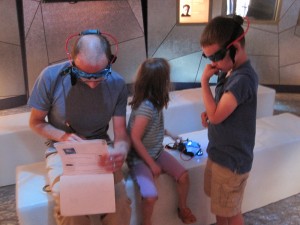 It turns out my family are pretty competitive – I think they got that from the other side – so my one regret was that we didn’t get to peruse as much of the cool stuff as I’d have liked, because they were very much focused on looking for the answers. But my husband still managed to take in a good chunk of the Bond-y goodness. He even defused a bomb and probably, you know, saved the world. Again. With a wry pun and a nonchalantly cocked eyebrow. (Because no matter how good Daniel Craig is – and he’s goooood – classic Bond is Connery all the way.) 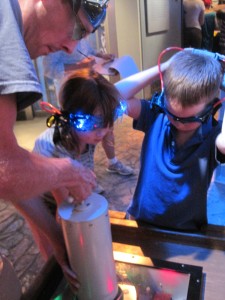 When we’d solved the code and come up with the answer we had to use a SpyGear walkie-talkie to find the combination to let us back into the room, because it was barred by a SpyGear room lock, another fun item from their new range. And then…

Well, sadly, we didn’t win, because they decided there would be no winners or losers because it was all good healthy family fun. My good healthy family was disappointed, but this allowed the kids to announce that we were the “real” winners, so that was fine. And we got to take home the goggles, our portraits, and a special gift of a Spy Gear pen that secretly records conversations. By the time we were in the car heading home, after a most successful and enjoyable evening, my daughter was recording herself saying “My name is Inigo Montoya. You killed my father. Prepare to die…”

Our great evening out was courtesy of Spy Gear and the International Spy Museum. You can pick up night-vision goggles, walkie-talkies, door alarms, door locks, recording pens, and more gadgets for the top-secret spies in your life at the Spy Museum store (or anywhere that carries spy gear!). The Exquisitely Evil: 50 Years of Bond Villains exhibition is included in the general admission ticket (children 6 and under are Free, ages 7-11 are $14.95 and regular tickets 12 and up are $21.95).

GIVEAWAY: We are giving away one spy recording pen to a lucky reader. Just leave us a comment (by 11:59 PM Sunday June 29) and tell us why the little aspiring spy in your life would enjoy a piece of spy gear. A randomly selected winner will be chosen by Monday June 30.

Christine lives in Prince George’s County with two small ninjas and one large Bond fan. She blogs at Awfully Chipper whenever she manages to defeat their nefarious evildoings and get a moment to herself.