Telling people about your school’s gardening or recycling programs and then hearing about theirs might be the best early networking activity I can think of! 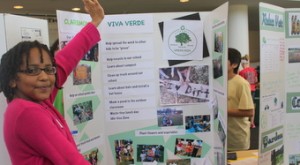 For the third year in a row, the non-profit alliance of environmental educators NoVA Outside put on a successful School Environmental Action Showcase, or SEAS event on April 10. 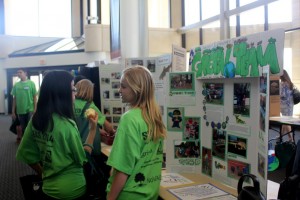 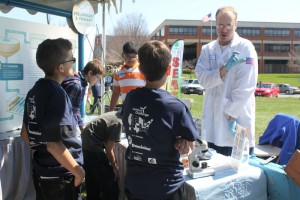 Geared for students in grades three and up, the inaugural event in 2012 was called a “Green Schools Expo” and focused on exhibit tables for schools and partnering organizations. This year and last year, the SEAS program has taken place during the school day and has also included hands-on activities for students to participate in as well as the expo hall. 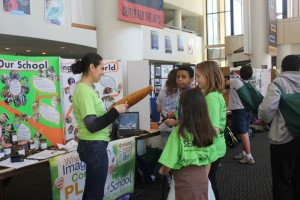 The 2013 event added the Caring for our Watersheds competition, which gives students grades 6-8 participating in Earth Force teams the chance to answer the question, “What can you do to improve your watershed?” Groups that had been working on a particular issue had a chance at SEAS to present their proposals to peers and judges and to win some serious coin for their schools. This year, the winner – George Washington Middle School with its Dissolved Oxygen Project – went home with a check for $1000. 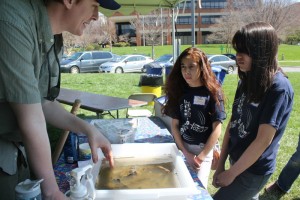 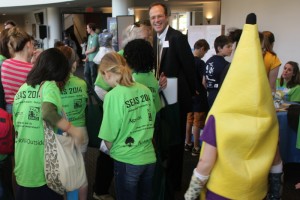 The SEAS event got so popular this year that it filled up with school participation a few weeks before the event, but it was still free and open for anyone to join. Some 800 people attended. You could have spent the entire day just on the lawn overlooking Mason Pond talking to the partnering exhibitors, people like nature centers and agencies tasked with natural resource management along with companies and organizations that support urban farming like WormWatcher and Arcadia Farm. 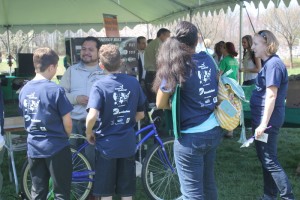 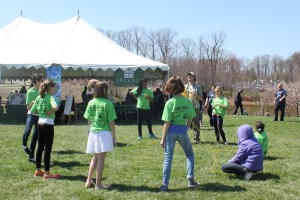 Inside George Mason University’s Center for the Arts were the student exhibits, which gave children an opportunity to speak to their own school’s efforts and to learn about exciting programs at other schools. The Center also housed the Watersheds presentations and a new feature this year, the KidWind Challenge which has students explore the power of wind energy and design and create a functional wind turbine. The middle school winner was Lanier Middle School, and Jack Jouett Middle School won the open division. The National KidWind Challenge takes place here in town on the National Mall on Saturday, April 26 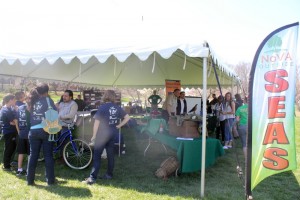 And if you want to get more involved in environmental education, NoVA Outside is putting on its third Early Childhood Outside Conference  also on April 26 at Westlawn Elementary school in Fairfax with the theme “The Arts in Nature” and is also sponsoring a book discussion on May 13 about Adventure: The Importance of Risk in Children’s Play. 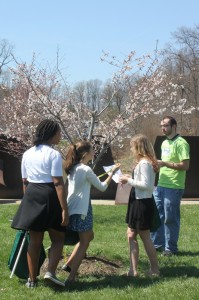 Jessica Claire Haney hopes that her second grade son will get to go to the SEAS event next year. A longer version of this article appears on her newly-launched website, Mindful Healthy Life of Metro DC, a local resource website for natural living and family wellness. Her personal blog is Crunchy-Chewy Mama. She is a member of NoVA Outside.