Inside Out: Dress-up Fun at Imagination Stage

Inside Out: Dress-up Fun at Imagination Stage 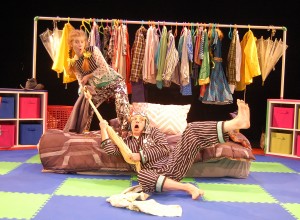 It’s time for bed, but instead of quietly going to sleep two children use their imaginations to create a wild adventure right in their bedroom – along with a huge mess. If this sounds like something that could happen at your house (or perhaps already has!), then Inside Out is the show for you.

Part of Imagination Stage’s My First Imagination Stage season of shows designed for children ages 1-5, Inside Out is an interactive show full of dress-up, dancing, and creativity. The show, making its world premiere at Imagination Stage, is the second collaboration with the U.K.’s Tell Tale Hearts Children’s Touring Theatre Company. 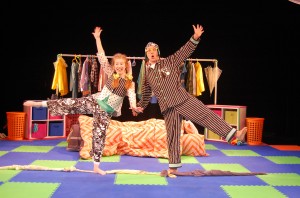 Can’t quite picture taking such a young child to a play? Imagination Stage’s My First Imagination Stage productions are crafted with the littlest theatergoers in mind – in fact, a team of Imagination Stage artists visited a local child care center to observe how two and four year olds played with clothes as part of the development process for Inside Out. Shows are staged in the round in a small, cozy theater, with children seated in a circle at the edge of the stage with adults seated right behind them. My First Imagination Stage shows frequently include audience participation for those who want to join in – and even parents get in on the act depending on the show!

I took my two year old son to see Inside Out with me. This wasn’t his first trip to Imagination Stage, but it was his first trip without his sister (hands down the biggest theater buff in our house) and it was his first interactive show. As we sat down in a circle on the edge of the stage, he was handed a small drawstring laundry bag full of props. Throughout the show, he and the other children in the audience had the chance to join in the action. He was thrilled to get to participate in the show, and I only had to retrieve him from the set once – the beds onstage were mighty tempting. 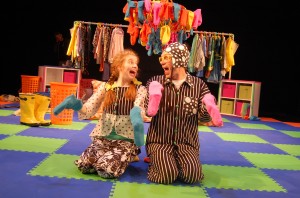 As the show ends, the two characters – played by Megan Graves and Bradley Foster Smith – dump out baskets of dress up clothes and invite the children in the audience to play. This was hands down my son’s very favorite part of the show – not so much because he wanted to dress up, but because he loves to clean up and spent the play session scooping clothes back into the bins.

All photos courtesy of Imagination Stage.

Imagination Stage provided us with tickets to the show – all opinions are my own. Allison writes about life at home in the Maryland suburbs at Home and Never Alone.