Escape to Narnia: Review of Encore’s The Lion, the Witch, and the Wardrobe

Escape to Narnia: Review of Encore’s The Lion, the Witch, and the Wardrobe

Seeing characters you’ve met in books come to life on the stage is almost always a magical experience, and watching Encore Stage & Studio’s production of The Lion, the Witch and the Wardrobe was no exception for me and my seven-year-old son.

It had only been a week since we’d started the C.S. Lewis book after my son’s school hosted a Hampstead Stage Company touring production  of Prince Caspian, another in the Chronicles of Narnia series, which I read when I was a little older than he is now. He was looking at a flyer for the Encore production just as I got wind of the chance to review it, so we picked up the book that night and eagerly awaited the play. 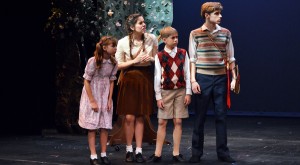 The Lion, the Witch, and the Wardrobe concerns four children who stumble into the world of Narnia through a wardrobe in an old house. Magical creatures and talking animals tell the children of the prophecy that when four humans – two “sons of Adam” and two “daughters of Eve” – sit in the castle thrones, that will mark the end of the reign of the White Witch, who makes it always winter and never Christmas in Narnia. I assure you that this will all become crystal clear if you head to the play without having read the book.

My son and I had read all but the last dozen pages of the book before we left for the Saturday performance, including nearly 40 pages just that morning. As a result of our cramming, it felt like the play came alive almost on cue. Talk about rewarding procrastination! The scenes were acted out in front of us just an hour or two after we’d read their very descriptions. 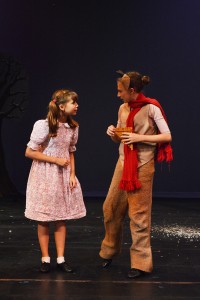 The Arlington, Virginia-based theater group did not disappoint. All the Encore actors, ranging in age from sixth grade through early college, were clearly having a great time and had obviously logged plenty of hours on stage, likely through Encore’s classes and camps. Novices these were not. The principals were all engaging and compelling, and the other members of the company added in texture that underscored the good vs. evil plot. 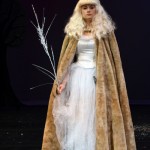 Cases in point: the joy of the unicorn and stag in the opening ballet-like sequence that shows Narnia to us before it does to Lucy, and the sinister, hunched tauntings of the ghouls on the White Witch’s side.

It can be easy to find child actors more endearing than entertaining, but not with this polished cast. As someone who thinks her son would probably love being onstage and has been surprised that it’s one of the few things he’s been reluctant to try, I was happy to see him witness such strong performances while he was also reinforcing what we’d read together.

Fans of the book will note that this production directed by Amy Thompson using  Joseph Robinette’s adaptation, leaves out any conversation with the Professor who believes the children’s adventures in another world and also leaves out most of the more ugly behavior of Edmund. In this version, he doesn’t lie to his older brother and sister about being in Narnia for the first time with Lucy. In fact, the three different visits fairly easily meld together without pause, which, as my son pointed out, made it easier so the crew “didn’t have to move all the (set) pieces again.” 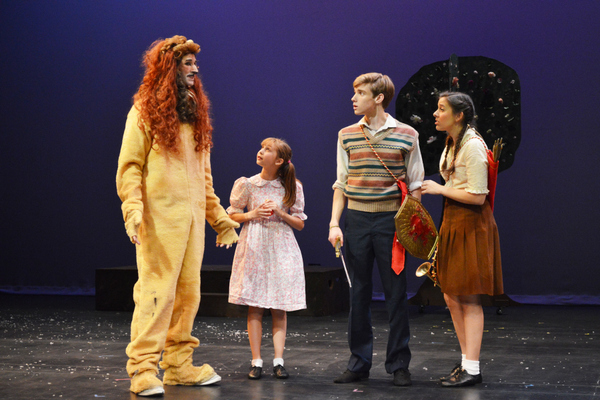 As a result of not seeing Edmund change dramatically from a complete jerk to a repentant devotee of Aslan, the Jesus-like character who has to die for Edmund’s treachery, the story seems more like the wacky adventures of another world than a heavy-handed lesson about choosing the right side. 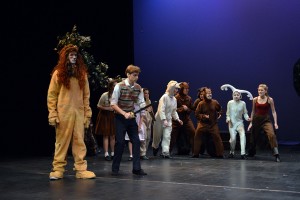 Aslan, the lion who has dominion over Narnia and other countries but has been pushed out for many years by the reign of the White Witch, must be a tough role to play. I mean, how exactly do you play a furry version of God?

In the book, Aslan becomes incredibly sad before carrying out his secret deal with the White Witch to save Edmund’s life by sacrificing his own. This seemed a little peculiar or self-serving to me when you later hear him say that he knew that the magic even deeper than the Deep Magic that gave the witch the right to blood from a traitor would actually cause the Stone Table to break and death to reverse itself. But I suppose no one exactly wants to go under the knife, even if he knows he’ll come out of it okay.

The production did a great job of negotiating the necessity for fear with the tolerances of a young audience. My son, a sensitive child, definitely benefits from knowing what to expect, and this was no exception, but at seven, he probably would have been fine watching this production even if its story were new to him. How the play production compares to the 2005 film version, I can’t say, as I haven’t seen it.

The recommendation of the production for age 4 and up is a good one, as much for the length of the 90-minute show (including an intermission) as for anything else. There were some dramatic lighting effects and music used to heighten tension in a few key spots. My son was probably more moved by some of the freaky characters on the dark side who were really feeling their parts. The taunting of Aslan was not drawn out, and his stabbing was obscured by the witch’s body though clearly suggested.

Even if a young theater-goer is a little spooked by that scene, or the broken stone table, or the battle that ensues after Aslan’s resurrection, he or she will probably feel fine after the coronation of the four children. And if not then, all is put right when one exits the lobby to a sea of smiling actors swinging their legs on folding tables and eager to give autographs.

The afternoon was a great date with my boy that has already spurred many delightful conversations. It was the perfect way complement to our inaugural reading of the Narnia books.

Disclosure: I received two free tickets to this performance. All opinions are my own.

Jessica Claire Haney is a frustrated wanted-to-be-a-child actress who is trying to live out her stage dreams through her son. Fortunately, he has no idea. Jessica usually blogs about living naturally (most of the time) at Crunchy-Chewy Mama. She is working on her first novel and is starting a resource website: DC Healthy Green Families.