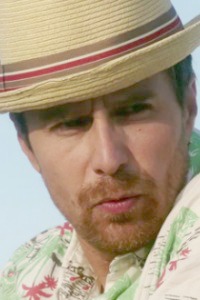 Last week, I joined a group of girlfriends for a movie that I had heard some buzz about, and I was intrigued to see what everyone had been talking about. It didn’t take too long into the movie for me to realize that the highlight of the film was most definitely going to be one member of the magnificent ensemble cast- Sam Rockwell. Shortly into his time on the screen, I leaned into my friend on one side and asked, “Did you know who this guy was? I don’t recognize him at all, but I think he’s my new favorite actor!”

The film we had the great pleasure of watching together was “The Way, Way Back,” which I highly recommend for the perfect summer movie outing with some awesome pals. Our group of five unanimously agreed that it was a funny, touching, and sincere film, and every member of the cast carried their roles perfectly. (Though I did find it challenging to see Steve Carell play such a mean-spirited tool.)

Sam Rockwell plays Owen, a goofy, man-child kind of character, whose semi-irresponsibility is somehow swept away by his charm and sense of humor. His protective nature is quickly revealed through his interactions with the teenaged main character, and it’s quite easy to fall for him on the screen as I quickly did! Here’s some of his basic info:

Check out the official trailer for “The Way, Way Back,” and pay attention around the :52 mark for Sam Rockwell. Prepare to be charmed.

Dawn loves going to the movies, especially in the summer and especially with friends who love to laugh as much as she does. She blogs at my thoughts exactly and reviews books at 5 Minutes for Books.