Reading a novel by Takoma Park author and mother of two Allison Leotta is a thrill for anyone but a special treat for DC-area residents who will recognize landmarks and streets featured in the books and appreciate a glimpse into the inner workings of the government behind all that white marble.

The main character in Leotta’s books is Anna Curtis, an Assistant U.S. Attorney prosecuting domestic violence and sex crimes cases. In the world Leotta has lived as a federal prosecutor and then imagined in her steamy and thrilling novels, long-legged Anna fights the good fight and teaches us a whole lot along the way about how the law works. Or doesn’t. 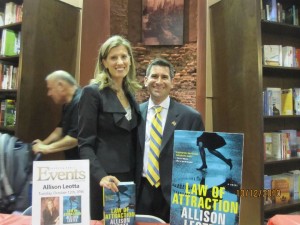 Allison Leotta and her husband, Mike

When I attended the Politics and Prose reading for Leotta’s first novel, Law of Attraction, in 2010 and saw my high school friend for the first time in nearly 20 years, it was my first night away from my two-month-old daughter. Leotta’s eyes sparkled as a fan asked about future projects and she shared the nascent idea for a second book combining the world of politics and professional escort services. 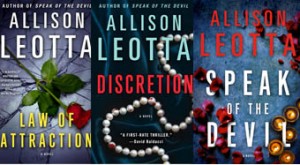 Shortly after the great success of that first book, Simon and Schuster signed Leotta on to write two more. In less than three years, while I’ve been watching my baby girl grow (but not outgrow diapers), Leotta has not only written and had great success with her second novel, Discretion, but has gone on to also write a third.

Speak of the Devil addresses the world of the MS-13 street gang and will be released on August 6, with a reading at Politics and Prose scheduled for August 8. Leotta has signed on to do an additional two books and is now at work on her fourth out of five.

I had to ask this amazingly successful woman who went from our suburban Detroit high school on to Harvard Law: What gives? How did she pull this off as a mom of two young sons? I mean, hadn’t I seen her ask on Facebook shortly after she stopped working at the U.S. Attorney’s Office in order to write full time, “How does anyone get anything done working at home?”

I imagined her baking cookies during the day and somehow stepping into a time machine that night to rewind and pause reality. Or just being an incredible rock star, as she was on the high school debate team and track team.

I was relieved to hear her admit when I caught up with her on the phone recently, “I do need 8 hours of daycare.” Okay, so we live in the same reality after all. She now treats writing like her full-time 9-5 job, usually writing in the morning and doing more on the business side after lunch. “It’s like running a small, unglamorous business,” she said.

I don’t know, getting to speak on a panel at the recent Washington Independent Review of Books’ “Books Alive” conference with George Pelecanos sounds like a nice slice of glamour to me.

But on a daily basis, Leotta has to sit her “ass down in a chair” to create compelling worlds of intrigue and suspense that manage to shed a whole lot of insight on race relations, gender issues and the intricacies of law.

Her books also provide a lot of fun for DC-area residents who like to spot streets and restaurants they know in fiction. And her blog posts analyzing and grading “Law & Order: SVU” for its accuracy are fascinating and arguably far more entertaining than the actual show.

Leotta has the full day to work because her older son goes directly to her younger son’s daycare from school on a bus with a lot of other kids during the school year. “I have some lawyer friends who have nine hours of daycare and then an au pair on top of that,” she said, glad that she has the flexibility to spend mornings and evenings with her sons and the full day on her writing.

At the same time, she does recall that she was very productive before having kids, when she got up to write from 5 to 7 a.m. before heading in to work as a prosecutor. For her, writing first thing in the morning was magic; she was in the zone. But now at that time of day, she’s either already with her kids or is thinking about buying groceries, rescheduling playdates and the like.

Leotta acknowledges that having too much time during the day can “sometimes come with its own set of challenges” and wonders if she’d be more productive if she knew she had only two hours like she used to rather than get distracted by doing research, or yoga, or laundry.

But whatever time you have, you can make it work, Leotta believes. Even though she acknowledged that it’s “really hard to hop in and out of your story” and that it’s best if you can find a time of day to write and treat that time as sacred, she also said that eventually things can get written “in the interstitial spaces.”

Things like, oh, Twilight, whose author Stephanie Meyer, Leotta recalls, worked on her stories in her head while driving her children to swim lessons and then wrote at night. Leotta only occasionally finds herself flitting out of this world and into fiction and needing to remind herself to wave at her kids. I can’t say the same. My hope is that more childcare in the fall will bring me more focus to work and to parenting. It sounds like Leotta has hit on a pretty decent balance.

At least it did in the 15 minutes we stole on the phone. Wouldn’t you know that real life got in our way of hanging out for the first time in 22 years, so we fit in our phone conversation before a rescheduled doctor’s appointment. Next time, I’ll ask her how she manages to make dinner.
I learned after we spoke that Leotta’s first book is a Kindle Monthly deal for July on Amazon.com, so you have until July 31st to purchase the e-book of Law of Attraction for just $2.99.

Leotta has offered a signed copy of Speak of the Devil for one lucky winner. To enter to win, you have until midnight on Saturday, August 3 to comment below about why you want this thriller in your hands.

In addition to chatting up friends she hasn’t seen in 20 years, Jessica Claire Haney blogs about living naturally — most of the time — at Crunchy-Chewy Mama and co-leads the Arlington/Alexandria chapter of Holistic Moms Network.