The narrative arc of  Forrest Pritchard’s new book, Gaining Ground: A Story of Farmers’ Markets, Local Food, and Saving the Family Farm, largely concludes before the birth of his son in 2005, but Forrest says he now “cannot imagine not being a father.”
This was a surprise, because the sustainable farmer from Berryville, Virginia hadn’t much imagined himself as a father. He laughs now, “Boy, were all my instincts wrong.”
It was over fifteen years ago that Forrest graduated from William and Mary with degrees in literature and geology 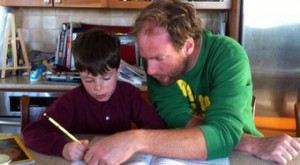 and came to the realization back on the farm his family had owned for seven generations that he wanted to save it. But more than that, he wanted to take what he would later call Smith Meadows Farm in a sustainable direction raising cattle on grass with no grain feed, and eventually, other pastured livestock.
The new book, out this week from Lyons Press, chronicles the many stops and starts along the way with wit and suspense. It makes the case for local food in terms anyone can understand. It is a book about being human, being passionate, and being open to learning.
When I interviewed Forrest recently, I asked about the part the book doesn’t address: parenting and farming. He said his parents never made him work on the farm but that eventually he chose to on his own. At age 11 or 12, he began working as a volunteer. He sounded pleased that his son, now in 2nd grade, and his nephew, in 5th grade, are following in those footsteps. They want to help sell food at farmers markets, to help load the trucks, and to check the chickens.
“Their body language screams, “Please, pick me!’” Forrest shared. He offered that both boys will have free will to decide their paths in life but is pleased that at age 10, his nephew “shows every interest in being a farmer.”
Forrest said that, in hindsight, he appreciates that he didn’t have a chore schedule as a child. This reflection led him toward sharing a broader philosophy about childhood, which he points out you only get “one shot” to experience.
“It’s one of those sacred periods,” he said. “It’s this halcyon period of time that we never get back. Kids should be allowed to be kids.” Forrest’s son and nephew both go to the same West Virginia private school he attended. He thinks that with his “active imagination,” he might have easily slipped through the cracks at a larger school.
“I think private schooling for me was pretty important to get some of the lessons to penetrate,” he said, noting that a short generation later, he might have been considered a candidate for ADD medication. “One thing I wish upon my son is to be taught at the rate and with the focus he needs to be taught,” even if paying for the school is a financial stretch for the family.
I asked about the early days after his son was born and if his wife, Nancy, had put on hold her pasta-making business, which Forrest describes her starting in the book. “We could not afford to,” he replied, noting the farm’s dire financial straits after his father’s death. Curious how they managed so many irons in the fire with a new baby, I recalled from the book that Forrest’s sister moved to the farm to help out. I asked how the family functions now. “It’s our own little village,” he said without skipping a beat. Adding that it’s not a utopia without idiosyncracies and arguments, he still considers it “own little support group.” 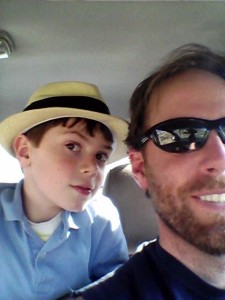 This life on the farm may be what raises the next generation of farmers, Forrest suggested. “You can’t explain the desire to become a farmer from a financial or logical perspective,” he said. It’s not a reliable way to generate an income, and you can’t support something empirically or scientifically when there is so much variability. “You almost have to be born into it,” he said.
For six generations before him, every time the choice has been given whether or not to keep the farm going, someone has said yes. Forrest’s book chronicles what led to his choice to say yes – and to take the family farm into a sustainable direction – and the many adventures he had along the way.
Smith Meadows in Berryville, Virginia (in the Shenandoah Valley), is always open to the public with a store that operates on a trust system. The farm participates in many farmers markets throughout the metro DC area. Next Saturday, June 1, the farm will celebrate the debut of the book while it hosts its annual Farm Day potluck with burgers provided. Free registration is available at http://smithmeadows.com/farm-day-2013/ 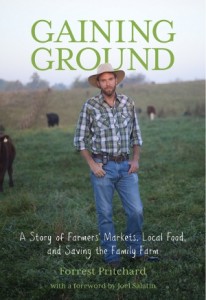 Jessica Claire Haney writes about food, wellness, and (attempted) mindful parenting at Crunchy-Chewy Mama and in her “Ingredients for Healthy Living” column at the Washington Times Communities Online.