Let Them Figure It Out

Let Them Figure It Out

I am a slacker-parent. In the years since I first claimed my slacker title, Lenore Skenazy created the term “Free-Range Parent” which not only sounds better than “slacker,” it comes with a whole philosophy attached, which you can debate with the other parents at your parenting group, proving that even if you’re not climbing the slide with your kid, you spent real time researching the reasons why you shouldn’t climb the slide with your kid. Sometimes I do call myself a free-range parent, but the truth of the matter is I’m a slacker. I would rather sit on the park bench and read a book, or commit that cardinal sin of parenting, play with my smart-phone, than climb the slide or push my kid on the swing. Back when my kids were in the “stick everything in their mouth” phase, I did put down my book long enough to take the mulch out of their hands and redirect them, but that’s about it. If my kid climbs too high on the playground climbing structure, or can’t figure out which fake rock to step on next at the climbing wall, my slacker philosophy lets me tell the kid to figure it out. 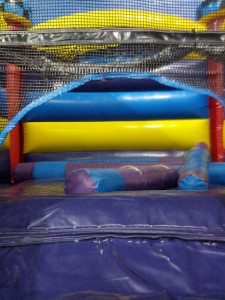 Last week I took my boys to open play time at a bouncy castle place, harassed them just enough to get their shoes and jackets into the cubbies, and then let them go. Then I sat on a bench and pulled out my notebook and pen to work on some particularly stubborn fiction. The boys knew where I was and every once in a while they’d come with a question, or just to report on their location. One of those reports was about the small gladiator bouncy castle arena. Usually the door to that particular cave of delight is blocked by a handwritten “Do Not Enter” sign. I assumed it was because the gladiator arena was home to several large foam logs with handles, used to bash the other occupants under the supervision of one of the bouncy castle employees. But last week there was no sign, nor was there an employee. My 6-year old wanted to go inside.  I told him he could go. He was thrilled. He’d never been inside before, and a trip into a previously forbidden place was more than he’d dared to hope.

Of course, as soon as the 6-year old was inside, the 3-year old wanted to go in, too. And then there were other kids going in, some of them smaller than my boys, some of them much bigger. My instinct was to go protect my boys from the bigger kids, and warn them to stay clear of the smaller kids. I got up. I walked over to the gladiator arena, ready to start shouting instructions over the contempo-pop that was blasting through the sound system. But then I stopped and looked. Were my kids purposely hurting anyone? No. Were they being hurt? No. Was that bench over there still available for me to sit down and work on that stubborn bit of fiction? Yes!  So I went back to the bench.

Except that I didn’t work on the stubborn fiction. I watched the gladiator arena instead. Some of the kids were clearly too small to be in a bouncy castle full of flying foam logs. But they did not need rescuing. They simply slithered out the doorway and ran off to find other things to do. There were kids who were interested in a front row seat to the action, but weren’t ready to join in. They grabbed foam logs and used them to shield themselves in the corners until they got the hang of the place. And then there was the biggest kid, easily three years older than the next oldest kid in the arena. He had the biggest of the logs and was letting it fly. His mother stood by the entrance, pleading with him to be gentle with the smaller kids. I closed my notebook and walked up to her with a smile. She smiled back with that apologetic smile you have to use when your kid just dumped a bucket of dirt on another kid’s head.

I have to assume that the log-wielding boy was her only child, because I know from personal and parental experience that karate classes are not the only way to learn how to bash someone over the head, or to learn to avoid being bashed over the head. I learned those skills with my sister, just as my boys learn them with each other.

“I’ve been watching this thing for twenty minutes,” I said. “And the kids work this stuff out. If the other kids don’t like what’s happening, they’ll leave.”  A moment later a kid did leave, off to run the obstacle course, or shoot hoops in the basketball bouncy castle. The Karate Kid remained, as did my six-year-old. The older kid reduced the strength of his blows to suit the size of his opponent, and my six-year-old bobbed and wove and smiled the whole time. The other mother stopped hovering.

Of course if a child was in real danger, if a couple of kids ganged up on the kid and wouldn’t let him leave, I would step in, but that didn’t happen. No adult needed to squirm through the low door and supervise. No one needed to separate kids or put anyone in time out. No yellow cards were issued.  The kids just figured it out, a skill they’ll need every day for the rest of their lives.

Jennifer Thorson is a birth doula, author, occasional blogger at Bread, Wine, Salt, slacker mom and maid of all work at her home in Greenbelt, Maryland.

About the Author: Jennifer Thorson

Jennifer Thorson is an author, birth doula, occaisional blogger at Bread, Wine, Salt, wife, mother of two boys and maid of all work at her home in Greenbelt.