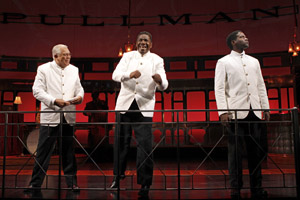 Going to Arena Stage is always a pleasure, but there are some shows that resonate more than others. “Pullman Porter Blues” was so good, my husband asked if he could write the review (which he received no compensation for other than my gratitude!).

If Hollywood is to be believed, the Civil Rights Movement consisted of brave white people standing up for the rights of downtrodden blacks, a story repeated in Mississippi Burning, Ghosts of Mississippi, and The Help.  The truth of the matter, of course, has blacks organizing the sit-ins, marches, boycotts, and strikes, and blacks bearing the hoses and dogs, the clubs and the firebombs.  And in telling the true tale of how a people fought for their own equality, the name A. Philip Randolph emerges again and again.  Randolph’s Brotherhood of Sleeping Car Porters, the first all black union formed in the 1920s, supplied the organization, tactics, and membership for the Civil Rights Movement of the 1950s and 60s.

Pullman Porter Blues, the powerful new musical now playing at Arena Stage, movingly and joyfully illustrates one night early in the process.  Set aboard a Chicago-to-New Orleans train in 1937, none of the (paying) white passengers are seen.  The action, instead, focuses on three generations of Pullman car porters working that train, each trying to maintain his dignity while struggling to maintain the demeaning obsequiousness the job demanded.

Larry Marshall plays Monroe, the clan patriarch, whose Uncle Tom demeanor conceals a steely core and subversive spirit.  Cleavant Derricks, who won an Oscar in 1982 starring in the original cast of Dreamgirls, plays his son Sylvester, an organizer for the Brotherhood, whose anger and stubbornness conceal a wounded spirit looking for validation.  Warner Miller, plays Cephas, Sylvester’s son, whose promise as a college student becomes less certain as the journey progresses.

Backed frequently onstage by a four-piece blues band (who play traveling musicians), all three men possess powerful singing voices.  Monroe’s booming baritone fills the theater during each of his numbers, and Derricks demonstrates the talent that won him his Tony thirty years ago.  The biggest musical talent in this show, however, gets wheeled in on a luggage cart a few minutes after the show begins.  Making an appearance as a blues singer as brassy as her voice, E. Faye Butler’s Sister Juba electrifies the house every times she sings a note.  Butler, who portrayed wise Aunt Eller in Arena’s hit revival of “Oklahoma!” and the worldly veteran actress in last year’s backstage play “Trouble in Mind (the title of a stirring number delivered by the three porters),” brings an invaluable energy to every Arena stage production in which she’s cast.

If there’s a weakness to the evening, it’s the two white characters.  Except for one short monologue that sounds suspiciously — but satisfyingly — like a modern-day Tea Party lament, Richard Ziman’s conductor surprises no one when he finally commits the worst actions of a drunken racist.  And Emily Chisholm’s cornpone stowaway introduces a largely unnecessary subplot and too much “aw shucks” acting.

But if these two characters fail to satisfy, the balance of the play delivers a vivid portrait of four African Americans trying their best to survive a trip south at the very beginnings of America’s Civil Rights Movement.

If you’re looking for a fabulous stage production to see this holiday season, go see “Pullman Porter Blues.” Tickets still available for the most performances, which are Sundays 7:30PM, Tuesdays 7:30PM, Wednesdays 12:00 PM and 7:30 PM, Thursdays and Fridays 8:00PM, and Saturdays 2:00PM and 8:00PM now through Sunday Jan. 6.

Honesty Clause: I received two complimentary tickets to see the production, but but as a career-long entertainment writer, comp tickets never influence my or my husband’s opinion of a production.