Do You Hear the People Sing? Les Miserables Returns to DC: Discount Code

Do You Hear the People Sing? Les Miserables Returns to DC: Discount Code 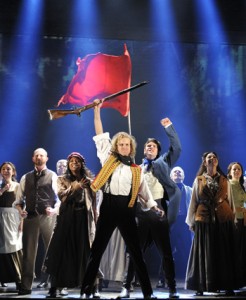 This is the perfect year to see Les Misérables, because you can compare the stage production to the film adaptation directed by Tom Hooper. When publicity for the National Theatre’s upcoming 25th Anniversary touring production of Les Misérables asked me to write about a discount offer, it was a no brainer, because it’s a musical dear to my heart.

I am proud to say that I was lucky enough to see the original cast on a 1986 trip to New York. I remember my stepsister Patty and I singing every song on the Broadway cast album, which we owned on cassette. Maybe you also have one of those iconic grey T-shirts with the orphaned girl on the front to prove your old-school Les Miz love. It’s an unforgettable, epic musical, and I can’t wait to share it with my children. I hope you’ll consider going to see it here in DC — and then seeing Hugh Jackman, Russell Crowe and Anne Hathaway on the big screen.

To get you in the mood for Les Miz, which is playing at the National Theatre Dec. 13-30, watch this video from the 25th Anniversary concert in England of the Four Jean-Valjeans on stage together. They performed what’s been called the Valjean Quartet of the show-stopping, tear-jerking “Bring Him Home.”

Cameron Mackintosh presents LES MISÉRABLES, with glorious new staging and dazzlingly reimagined scenery inspired by the paintings of Victor Hugo.  This new production has been acclaimed by critics, fans and new audiences and is breaking box office records wherever it goes.

Here’s a sneak peek of the performance!

*All performances 12/13-12/23 EXCLUDING Thursday, Saturday and Sunday matinees & Saturday evenings.  25% off all price levels EXCLUDING Prime Orchestra (PS10) and the first three rows of the front mezzanine (PS20).  Subject to availability.  Restrictions may apply and cannot be combined with any other offer.