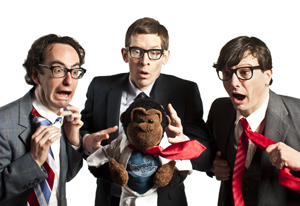 For four consecutive weeks, we are offering our readers the chance to win a family pack (up to four) of tickets to attend Strathmore’s Backyard Theater. Last week, my two older kids and I attended Snowday’s performance, which kicked off the summer concert series. The a cappella group was amazing, singing everything from doo wop to ’80s classics to contemporary hits. The three of us sat in a shady spot under the large tent (bring a picnic blanket and some snacks, or enjoy the complimentary snowcones!) and rocked out to the music. Unfortunately we can’t attend this week, but we hope one of you will, because this week’s entertainment is the kid rock band Recess Monkey. Hailing from Seattle, Recess Monkey sounds (to me) like Vampire Weekend for kids.

As “People” magazine said of Recess Monkey: “Who would know better how to entertain kids than a trio of teachers – who rock? The members of Recess Monkey “kick it space-age style on a boppy set with songs that future astronauts will find irresistibly fun.”

Check out the video for their catchy single “Lemonade”

More about Recess Monkey: The guys of Recess Monkey are like J. M. Barrie’s fabled Lost Boys – they never grew up.  The trio of teachers—Jack Forman, Daron Henry and Drew Holloway—met while working at the same Seattle school and released their debutCD, Welcome to Recess Monkey Town, in 2005. At Backyard Theater, the “irresistibly fun” (People) band will celebrate its seventh album and 2012 release, the circus-themed In Tents. In addition to ring masters and lion tamers, the group will infuse sing-able tunes about sea monsters, Tonka trucks and loose teeth with family-friendly rock-pop beats and a 1960s Beatles vibe. Raves USA Today, “There are bands you can’t go wrong with, and this is one of them.”

The Strathmore Mansion is at 10701 Rockville Pike North Bethesda, MD

To enter the weekly  giveaway, just leave a comment by 9 AM this Wednesday morning explaining why your family needs a little theater outing this week. Winner will be notified Wed. afternoon!

Sandie clearly loves Strathmore nearly as much as the Brooklyn Academy of Music. She blogs about Young Adult literature at Teen Lit Rocks and occasionally about herself at Urban Mama.